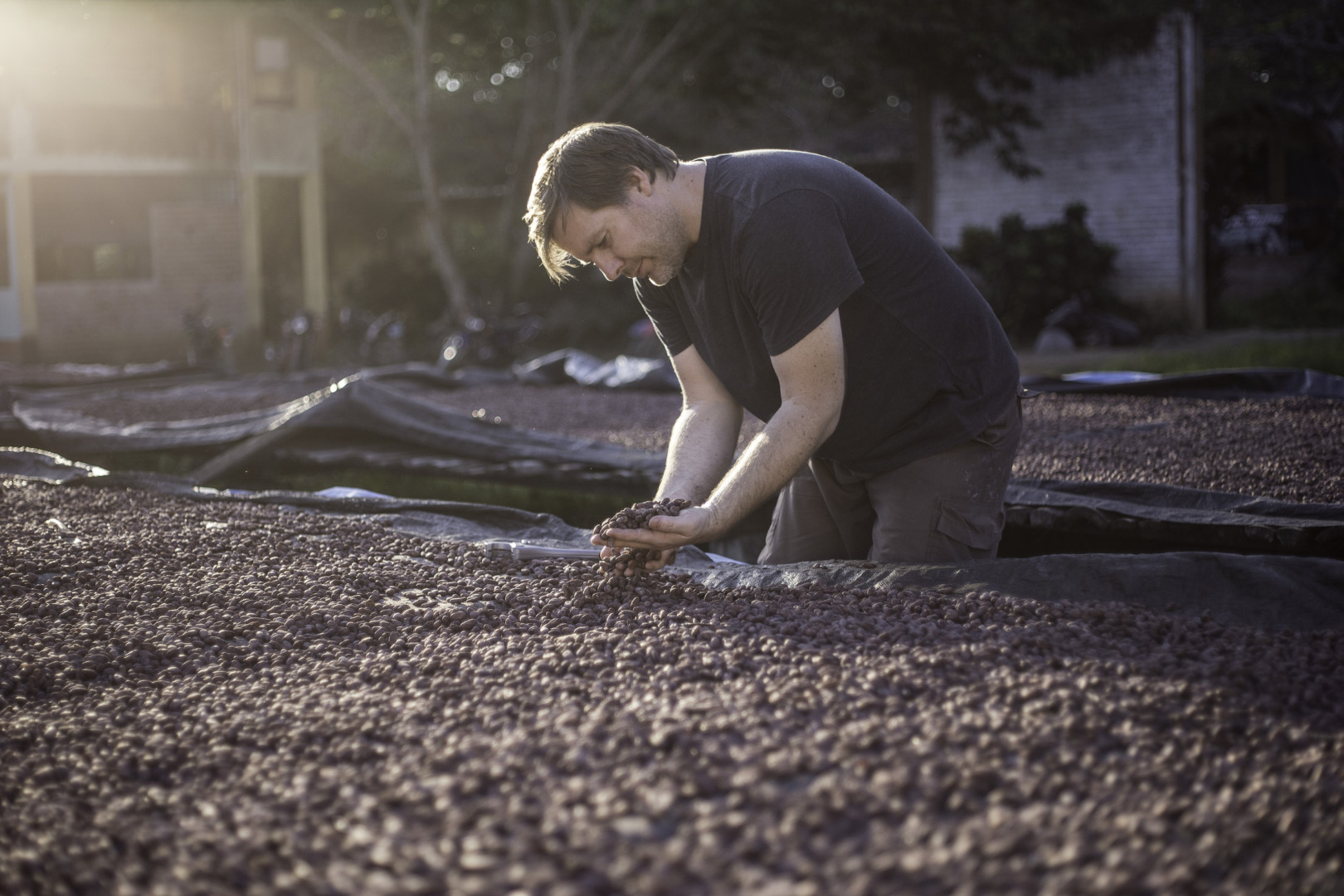 Geography has never been my strongest subject.  So even though I know that cocoa only grows within a band of 0-20 degrees of the equator, I struggle to identify which of the following countries does NOT both grow and craft chocolate and wine:

The answer is Chile (in the USA, Hawaii grows cocoa as well as coffee, Bolivia growns both and in Australia they grow wine in both the South West and South East, plus cocoa in the Daintree Rainforest in the North).  Chile grows some amazing wines (which pair wonderfully with craft chocolate, as we plan to show in an upcoming Virtual Wine and Craft Chocolate Tasting).  However it’s too far south to grow cocoa.

Despite this, Chile does have its own bean-to-bar, small-batch craft chocolate maker, ÓBOLO.  And we are delighted to welcome Mark Gerrits, the founder of ÓBOLO, and his bars to our chocolate library.  He sources his beans from the Pangoa Cooperative in neighbouring Peru, and we are delighted to finally have these for sale – see below, or here, for more details.

Mark Gerrits, born in the USA, went on a three-month backpacking trip to Chile in 1994 and has basically yet to return. He stayed in Chile until 2001, when he moved to Napo, Ecuador, to work with a number of cocoa-growing communities. In 2003, he returned to Chile to join The Nature Conservancy.

Having been “bitten” by the chocolate bug in Ecuador, Mark determined that even though Chile does not grow its own cocoa, it would be far more environmentally sensible to craft chocolate in Chile.  He noted that Chile’s local chocolate market was comparatively large, compared to its neighbours (though it has a fair way to go to catch the UK, see the full breakdown below).

And he saw the opportunity, and environmental benefits, of importing beans from nearby Peru rather than having the beans shipped to Europe (or the US), processed there, and then shipped back to Latin America.

So in 2013 Mark started to craft chocolate in his home, and by 2015, following unanimous encouragement from US makers who had tasted his early bars, he decided to throw himself full-time into crafting chocolate.

Mark named his company “ÓBOLO” after the Spanish word that means a gift or a small contribution in Spanish.  Or as Mark puts it “We at ÓBOLO are very grateful to everyone who supports us daily on this adventure: the cacao farmers, our local community, employees, clients, friends and family. ÓBOLO is our small gift back to the world; our way of saying thank you”.  If you dig back a little further, the naming is even more appropriate – the root of ÓBOLO comes from ancient Greek, where an ÓBOLO was a coin… just like the cacao bean was used as a unit of currency in Mayan and Aztec societies.

Mark also leveraged his knowledge of cocoa and Latin America to find a unique source for his cocoa beans.  ÓBOLO works directly with the Pangoa Cooperative in Junin, Peru.  The cooperative was established in 1965 to help preserve the ancient rainforests and 36 “Native Communities”.  In 1977 they set up a Coffee Co-Operative and, with ÓBOLO (and a few other US makers including French Broad and Fruition), they have over the last decade also formed a Cocoa Cooperative.

ÓBOLO crafts a variety of dark bars (including a very approachable 100%) to showcase the sherbety, fruity and nutty flavours of the Pangoa beans.  And in addition they’ve incorporated various local flavours and spices from Peru in their bars – we strongly recommend their Maqui Nativo bar, made with a local “superfood” berry.  In addition, they have an intriguing dark milk and (rare) white bar.  Please see below for more details.  And again, we STRONGLY recommend these bars with a local Chilean Malbec like Intipalka (and do write to us for more wine recommendations).

And just to remind you that we’ve a bunch more Virtual Tastings and Craft Chocolate Conversations now available — see here for the full listing and below for some highlights.

Wishing you a great weekend