Drink of the gods: Cocoa Pulp? 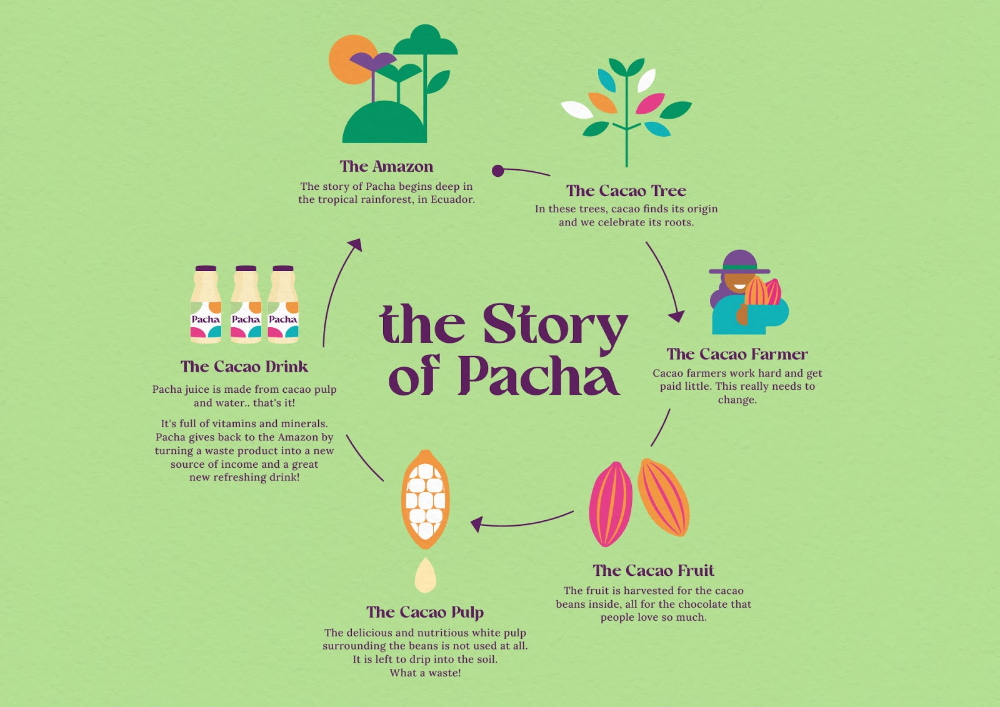 Despite it almost being the start of June, and the summer equinox less than a month away, summer sunshine has still yet to arrive here in the UK. In fact the water temperature in the ponds has been dropping over the last few weeks from a high of over 15 degrees Celsius to below 12.5 (from 60 Fahrenheit to low 50s).

But fear not; we’ve a ray of summer to bring to you. Thanks to Marika van Santvoort, we are delighted to be launching ‘Pacha de Cacao‘, a delicious fruit juice made from the pulp inside a cocoa pod.

To find out more about Marika and her new drink, read on below. Or just click here to be one of the first in the UK to try this delicious, nutritious, healthy and environmentally sensitive drink.

Pacha de Cacao is sold in recyclable glass bottles of 250ml, and we are currently selling it in cases of six, shipping it via DPD. Going forward we hope to find some other ways to ship it, but for now this is the only economic route we’ve found. So we’ve also added some other new bar suggestions below to make the most of the relatively expensive DPD shipping (which we normally use for wine!).

The transformation of astringent cacao seeds first into cocoa beans and then chocolate bars is pretty miraculous. A large part of the magic is down to fermentation, when the sweet pulp surrounding the cocoa seeds reacts with different bacteria and yeasts in the local environment to transform the bitter, astringent cacao seeds into cocoa beans which have some distinctly chocolate-like nutty, caramel, earthy, citrusy and woody flavours.

And if you ever have the chance to open, and taste, a fresh cocoa pod, you will know that the pulp is delicious. Depending on where you are and what cocoa pod you try, the pulp can have flavours that range from mango, lychee, citrus, peach, whey-like or even minerality. Indeed in South America many delicious deserts and drinks (both alcoholic and non-alcoholic) are often made from cocoa pulp.

However, most cocoa pulp is wasted. Some of the pulp is literally left on the jungle floor, and much of it evaporates and drains away during fermentation.

And this is a shame, given how delicious it is and given that cocoa pulp is approximately 30% of the weight of a cocoa pod. Cacao seeds (which become beans) account for another 20%, and the husk and outer shell of the pod is about 50%. The husk, or pod skin, can be transformed into fuel, fertilizers or even paper. But the pulp is generally ignored and effectively wasted.

And this is a shame, not just environmentally but also nutritionally. Cocoa pulp is also full of ‘healthy stuff’, everything from magnesium, potassium, manganese and vitamin B1.

With Pacha de Cacao, Marika has worked out a way to bottle the pulp for our benefit, and also to turn what was a waste product into another source of income for cocoa farmers.

Marika has a rich, and varied, career. Born in the Netherlands, Marika studied human rights and then moved to Africa to work for various NGOs, including Amnesty International, before spending two years in Cameroon where she worked to support local prisoners. Whilst in Cameroon, Marika fell into the world of cocoa, initially working on various cocoa sustainability projects before returning to the Netherlands. And since being back in the Netherlands, Marika has doubled down on cocoa and chocolate, helping to run Chocoa (the annual Dutch chocolate festival set up by Caroline Lubbers and Jack Steijn), setting up her a cocoa bean trading company that works directly with farmers (Gaia Cacao), and setting up Pacha de Cacao.

She describes Pacha de Cacao’s “eureka” moment as when she was talking to a farmer in Ecuador who she saw “eating the pulp and spit out the beans“. He explained that savouring “cocoa pulp” gave him “good energy”. Having seen similar behaviour in Cameroon, she realised that cocoa pulp need not be a “waste product” but could become an intriguing new product and an additional source of income for farmers.

Fortunately for Marika (and us), cocoa pulp is being developed by many of the ‘big chocolate’ companies like Nestle and Callebaut as a source of fructose (i.e. sweetener) and to make various claims about “no added sugar” (see elsewhere on our blog for more on this); so they’ve tested, and ensured, that cocoa pulp is certified as a foodstuff both in the EU and US.

But there is remarkably little (published) research on cocoa pulp. There is some work on making alcoholic drinks out of cocoa pulp in South America. But very little has been done to make cocoa pulp into the next coconut water (one US company did try a decade ago to make smoothies with other fruits and cocoa pulp but sadly folded).

Marika has therefore spent the last few years developing her own processes and procedures from scratch. She currently works with two farms in Ecuador who remove a significant amount of the pulp before they ferment the cacao. And Marika works with a local Ecuadorean factory to pasteurise, remove fibres from the pulp and then freezing this before shipping it to Amsterdam where the pulp is then further purified and bottled.

For those interested in cocoa varietals and fermentation, one intriguing side-note is that Marika may have finally found a good use of CCN51, a high yielding cocoa clone ‘invented’ in Ecuador back in the 1970s. This mass produced clone has memorably been described by Ed Seguine as having the flavour of “acidic dirt”, but may be improved by Marika’s processes.

CCN51 was developed to be high yielding, disease resistant and low cost, not for ‘fine flavour’. And it is blamed for much of the deforestation of cocoa in the jungles of Ecuador. CCN51 it can be grown most efficiently by planting sapling CCN51 clones in cleared jungle land, and indeed following the hurricanes of 1997/8 where much of the Ariba Nacional Cocoa Crop was wiped out, farmers did plant CCN51.

CCN51 has a lot of pulp, indeed arguably more than needed to ferment the seeds (this is often cited as one reason for its less than enthralling flavour profile). So Marika, by working with CCN51 and removing pulp ‘pre-fermentation’, is not only crafting an intriguing drink, but possibly improving the flavour of CCN51 beans (although it’s hard to see CCN51 every generating the complexity and depth of Ariba Nacional, Maranon, Gran Blanco and other ‘heirloom’ cocoa varietals).

Marika and her team thought long and hard on how to describe and name their drink; eventually they hit upon Pacha de Cacao. In her words: “Pacha comes from the Quechua word for ‘soil’ and ‘earth’ and de cacao is Spanish for ‘of cacao’. Together they stand for ‘world of cacao’. We wanted to create a strong link to Pachamama, the female goddess, Mother Earth, who is an important concept in most of the Latin American cultures. We believe in giving back to Earth, and we do so by using the cacao pulp and preventing from it being wasted“.

As Marika said, tastes great, great history, and a great new use of what would otherwise be a waste product.

We really hope you enjoy trying this drink as much as we have! And do also try some great new bars, including Omnom‘s latest Cookies and Cream bar and Qantu‘s “Golden Bean” award winners to supplement your order.

P.S. We are DELIGHTED to announce a repeat ‘cook along’ with Simon Rimmer and Tappers Gin on the 17th of June. Back by popular demand; please see below and here to join in the Sunday Brunch like fun!