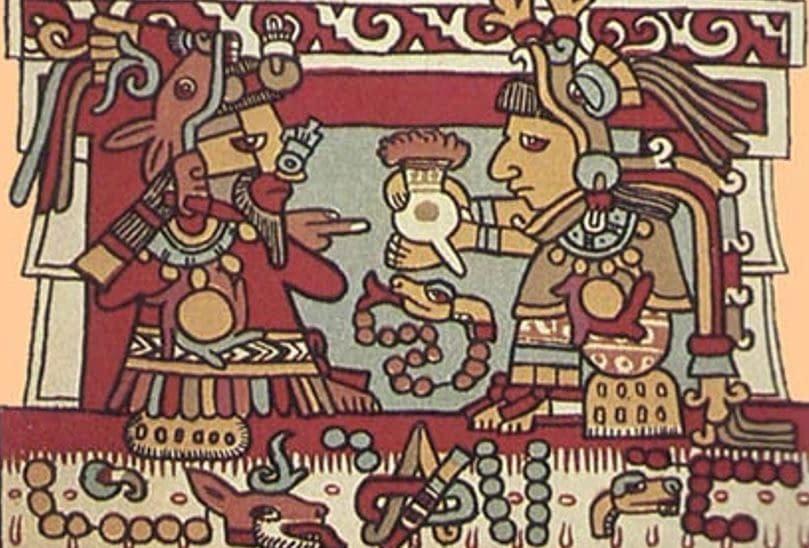 Chocolate’s deep past takes us to Central America, and the ancient Mesoamerican cultures. There’s an exciting world to explore; sometimes gruesome, sometimes spiritual and majestic.

The ancient region of Mesoamerica comprises a handful of central American countries; including northern Costa Rica, El Salvador, Belize and southern Mexico. This area was historically home to civilisations such as the Olmec, Aztec and Maya. Although it is unlikely that chocolate originated in this region, there is still a lot to say about Mesoamerican culture and cosmology, and its connections to cacao.

Chocolate has ancient connections with Mesoamerican civilisations; the Theobroma cacao tree, or the “cacao tree”, was intertwined in ceremonial practices of ritual and royalty, and therefore may be considered a strong socially rooted commodity.

So, what was so special about this commodity and how exactly was it used?

Delving into the Mesoamerican archaeology of chocolate, evidence suggests that from around 1500 BCE, cacao beans were ground and mixed with corn flour and chilli peppers to create a powerful punch. This chocolate drink was consumed at royal feasts and used in rituals.

The discovery of glyphs on Mesoamerican ceramic vessels is evidence for the ritual significance of cacao. For the Maya and Aztec civilisations, the cacao tree was a precious plant; believed to have been gifted to them by a feathered serpent god, known as Kukulkan or Quetzalcoatl.

Perhaps owing to its godly status, cacao was considered a food of the elite; in depictions, the frothy cacao drinks were commonly positioned at the foot of the king’s throne.

By the classical period (around 500 AD), evidence from vessels tell us that the role of cacao was diverse; images and glyphs display the variety of cacao beverages, each recipe owing to a different region, suggesting some form of cultural significance.

Cacao played a central role in Mesoamerican rituals. Pairing cacao and maize in their ritual beverages, the drink was believed to encourage agricultural fertility by feeding the gods and their ancestors.

However, cacao has a dark side. Owing to its growing conditions, in shaded areas, the cacao tree was associated with death and the underworld. At burials, the deceased would be armed with cacao for their journey to the next world.

In fact, documented in the Popol Vuh (a text recording the mythology and history of the Mayan peoples), there are depictions of a severed head of a Mayan god hanging from a cacao tree.

Further connections between Mayan mythology and cacao can be observed in their creation stories. Humans were believed to have been constructed of a gory mixture of divine blood of the gods and cocoa pods. Essentially, humans were made of chocolate.

This brings us back to royalty and rebirth. In the Mayan city, Palanque, there stands a monumental stepped pyramid structure known as the temple of inscriptions. Upon the structure, the Queen, referred to as Lady Sak K’uk’ is depicted reborn as a cacao tree.