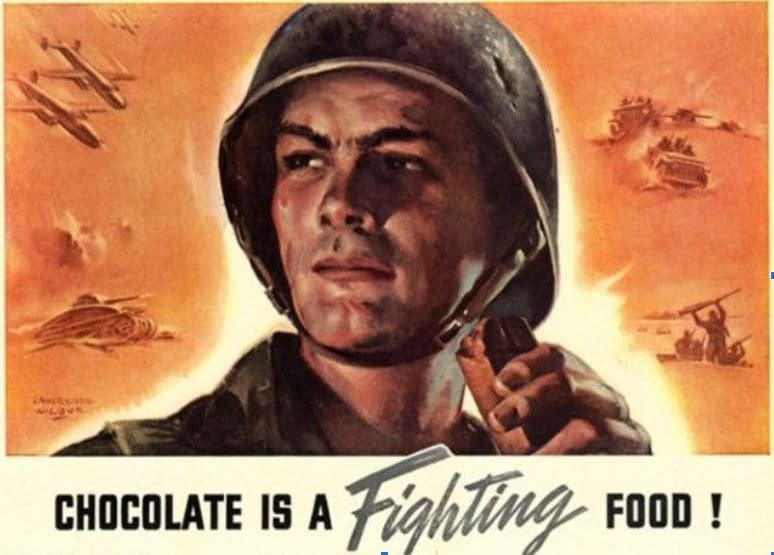 There have been studies that suggest that dark chocolates with a high cocoa content (like those here at Cocoa Runners) have numerous health benefits. Furthermore, chocolate contains caffeine and theobromine, both of which boost your energy.

Because of this and more, chocolate was used to ‘fuel’ soldiers throughout wars in history.

Chocolate consumption among American soldiers dates as far back to the Revolutionary War (1775–1783) when it was provided to the military as rations and even given to soldiers as payment.

Chocolate was also held in high esteem as a health and medical supply. In 1780, the Continental Army surgeon Dr James Mann requested a pound of chocolate to treat wounded men with.

With the invention of the chocolate bar by Joseph Fry in 1847, chocolate was no longer limited to being a beverage, and bars could be easily packed and transported in soldiers’ rations.

Chocolate in the First World War

In World War I, the British military gave soldiers chocolate to boost morale and energy. In December 1914, the city of York sent a Rowntree chocolate tin gift to all its men serving in the armed forces, and troops serving in France were given the Colonies Gift Tins, made in Mansfield, Nottinghamshire.

This was an important gesture to give the soldiers a taste of home and boost morale: many people had believed that the war would be over by Christmas.

Not wanting to be outdone by Britain, the American Army Quartermaster Corps started providing their soldiers with chocolate donations from companies back home. 20-pound (9.07kg) blocks of chocolate were cut down and hand wrapped.

This resulted in thousands of soldiers returning home with a sweet tooth! The chocolate business, both in America and in Europe, grew bigger than ever.

It was only in the Second World War that chocolate established itself firmly as a staple of military rations, especially in the United States.

In 1937, the US Army requested the Hershey Chocolate Company to create a specially designed bar for its emergency rations.

The requirements for the military chocolate bar were clear: It had to weigh about 4oz (113g), wouldn’t melt at high temperatures, be high in energy, and not taste so good.

What? Chocolate that doesn’t taste good? What’s the point?

Although it sounds like a paradox, there was a reasoning behind this. The army worried that if the chocolate was too tasty, the soldiers would end up eating it all.

Thus the D-ration bar was born.

A mixture of chocolate, sugar, cocoa butter, powdered milk, and oat flour, it ended up being too thick for the factory’s equipment and had to be packed into 4oz moulds by hand.

Hershey’s followed the instructions too well; the D ration bar was said to have tasted “a little better than a boiled potato”. The bar was bitter, extremely dense, and since it was meant to withstand melting (it was heat-resistant to 49°C!), it was nearly impossible to bite into. Soldiers had to shave off pieces with a knife to chew, or dissolve into a cup of boiling water.

The D ration was almost universally hated, and often found itself discarded by soldiers. Troops called it “Hitler’s Secret Weapon” because of its effect on their digestive systems.

In 1943, the Procurement Division of the Army again asked Hershey’s to create another chocolate bar; a heat resistant bar with an improved flavour.

The Hershey’s Tropical Chocolate Bar was more suitable for the climates of southeast Asia where troops were fighting against the Japanese. It came in smaller one and two ounce (roughly 28-57g) portions.

It is estimated that between 1940 and 1945, over 3 billion D ration and Tropical Bars were produced and distributed to soldiers throughout the world.

Although the D ration bar was discontinued after WWII, the Tropical Chocolate bar continued to be issued to soldiers in the Korean and Vietnam Wars before production stopped.

Hershey’s role in the war was massive, but they were not the only chocolate company to provide for soldiers. M&Ms were first released in 1941, and after the US entered the war, it was sold exclusively to the military. Like the D ration bars and the Tropical Chocolate bars, these chocolate beads encased in hard sugar shells were heat resistant, and better tasting. Once the war ended, the soldiers were still hooked, and the Mars company began producing M&Ms for the public in 1947.

Since the D ration bar, chocolate has been part of the US military.

Chocolate served its purpose of providing a morale boost as well as a high-energy, compact emergency ration.

It’s been historically proven. Browse our selection of craft chocolates for days you’re in need of a pick-me-up (we promise they taste much better than boiled potatoes!).