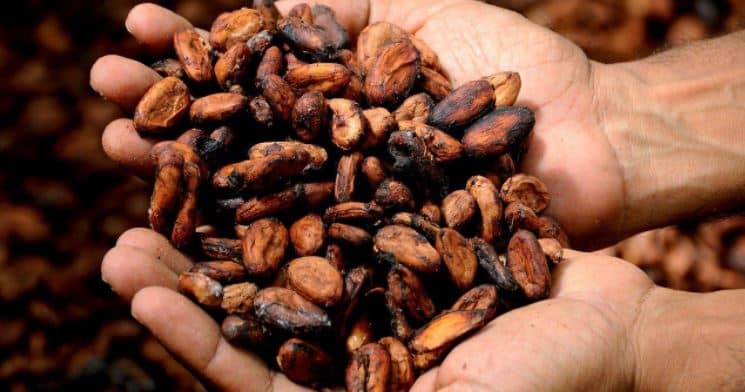 Chocolate is big business. We’re eating more chocolate than ever, but we often forget where this wonderful food comes from: the beans. But the supply chain for the beans is causing more harm to the world than ever before; to both nature and people. This is an overview on the detrimental effects of commercial cacao production.

The commoditisation of chocolate is ravaging rainforests everywhere. Between 1990 and 2015, forest cover in the Ivory Coast, one of the largest producers of cacao beans, has gone from over 25% to under 4%.

We were talking to Marc, co-founder of Belvie chocolate. He says that cacao is not that profitable a crop, especially when selling to the big companies like Callebaut and Nestle.

Growing cacao in bulk, such as is the case with the CCN51 varietal, will only cause more deforestation. Trees are being cut down to make way for the cocoa plantations which supply big chocolate. Even then, cacao does not grow in bulk very well, it takes years before a tree bears the fruit.

But we’re entering a vicious cycle here: one chocolate bar takes 1500-2000 litres of water to make; around the water used if you have a bath every single day for a month.

When trees are cut down, water previously held within the soil and roots and trunks are gone, stopping the water cycle in its tracks. Soon there won’t be any water left for cacao to grow.

Cocoa pods need high humidity and rainfall to grow. We are leading ourselves into a cacao and water shortage here. Cacao is not the only killer in commercial bars; there are also the additives. Soy farmers are devastating the Amazon to feed animals; especially cattle; and indirectly supply the soy lecithin and milk powder found in commodity chocolate.

Cacao growing has long had a problematic history. Despite Cadbury’s Bournville model village for their factory workers, their cocoa beans were sourced from Sao Tome, a small and fertile island where slaves harvested the cocoa right into the beginning of the 20th century.

The problems still haven’t gone away. Only recently has commercial chocolate decided to get their act together.

It’s only been since 2015 that Callebaut has partnered with the Cocoa Horizons Foundation to try to eliminate child labour or slavery in their supply chains. But even they admit that children still work in the cacao plantations in hazardous environments.

An estimated 1.56 million children work in cocoa production in Ghana and Ivory Coast, the largest cocoa producers in the world, according to research from 2018-19.

You might say that programmes like Fairtrade are changing the farmers’ lives for the better. In fact, Fairtrade is not all that beneficial for the farmers.

To qualify for Fairtrade and Organic labels, the farmers need to pay for that certification. However, more often than not, the farmers simply cannot afford it.

The global market price for cacao simply isn’t high enough. Fairtrade only works when raw products are bought in bulk; think how cheap and how plentiful Fairtrade bananas are. But because cacao farmers tend to have small plantations, they are not profiting from Fairtrade certification. Not only are cacao farmers hindered by Fairtrade, but coffee farmers too!

To make the living income, farmers are encouraged to produce bulk cacao to be sold at the global market price. They need to have bigger yields to make up for the costs despite their small plantations. So, farmers will mix their good and their bad beans together and craft chocolate suffers. Even then, the global prices for cacao fluctuate, and when they fall, the farmers suffer the economic hardships.

If the farmers are unable to balance the books with cacao, they end up cutting down their cacao trees and abandoning the crop for cash produce, like pomelo in Vietnam, or pineapples in Costa Rica.

How is craft chocolate fixing this?

By supporting craft chocolate makers, you are supporting the farmers who are growing cacao in eco-friendly and sustainable ways. Makers will choose cacao farmers themselves, whom they can trust to make high-quality cacao beans.

You also support those who don’t grow cocoa. Some craft chocolate makers, like Belvie in particular, will look for farmers who will supply them with cane sugar, and they only look for the best!

As we’ve said before, organic and Fairtrade labels potentially deceive the customers. The direct trade model of craft chocolate is far more beneficial than Fairtrade for the farmers.

Farmers are benefiting from the higher price: They can afford their daily living income and continue to grow cocoa beans for better quality craft chocolate, which you can then enjoy!

What can we do?

It will take a shift in mindset. First, think about what sort of chocolate we are buying, and where the chocolate bar sources its cacao from.

Read the label on the back; does it say something about the beans’ origin and where the bar was made? Is the bar only made up of ingredients that your grandmother would know?

Savour our chocolate; it’s not a commodity! Avoid the supermarket offers and pay that little bit extra for better chocolate.

Trust in the craft chocolate makers to provide a better chocolate that what the big companies could offer.

We the consumers can control what sort of chocolate we want. The benefits to you, the farmers, and the environment are well worth that little bit extra on the wallet.