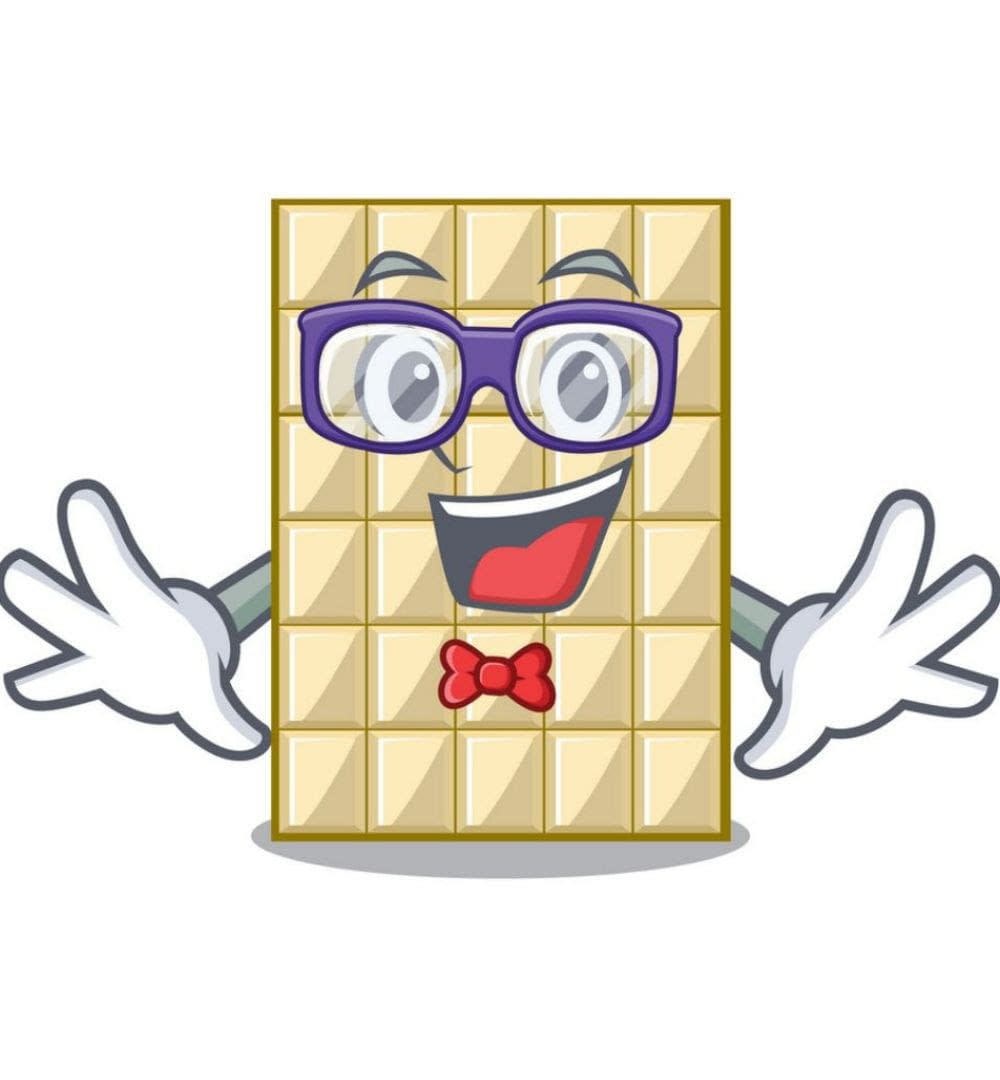 White chocolate is, to put it mildly, divisive. Some love it. Some disdain it. Some even challenge if it merits being called “chocolate”!

We’re going to put this to the test as we taste three classic white chocolate bars with Tim Lovejoy, Simon Rimmer and guests on Channel 4’s Sunday Brunch at 11am UK time this Sunday Morning (19th September). So please do tune in and watch. And we’ve pulled together a ‘taster box’ of the three bars we are tasting so you can see what all the fuss is about.

Plus we’ve used this occasion to do a quick deep dive to review the history and complexities of white chocolate (one of the first bars was sold as a kids multivitamin bar).

The History of White Chocolate and Vitamin Supplements

Nestle’s website argues that they “invented” commercial white chocolate with their launch of the Milkybar back in 1936. The Milkybar was a smart repackaging of Nestrovit, a kids health product launched a few years earlier and described as “a vitamin-enriched condensed milk for children that used cocoa butter to make it into an easy to eat bar”. With hindsight, the only surprise is that it took almost five years for Nestle to realise Nestrovit’s commercial potential. Since then, with a longish hiatus from 1940 to 1961 due to rationing and wartime shortages, it’s been a “best seller”, turbocharged by the Milkybar kids ads (started in 1951).

Nestle’s claim to have commercially launched the “white chocolate category” is hard to argue. And the flagship product it is still going strong; Nestle alone sells over 1.9 billion white Milkybar buttons in the UK per annum.

But quite how, and when, anyone first worked out how to make white chocolate is up for debate. White chocolate was almost certainly around before the launch of Milkybars in 1936 (or Nestrovit in 1929) and may well owe it’s genesis to BEARDS. In the early 19th century the Dutch were concerned about cocoa butter globules being left in their beards after they drank their hot chocolate (cocoa butter has many wonderful features, but it does not dissolve well into water, or milk, and will rapidly congeal, making a mess if any is left in a beard etc.). To avoid this unfortunate mess, a father and son team, the Van Houtens, came up with a machine to press cocoa beans and squeeze out much of the cocoa butter. This enabled the fashion conscious Dutch to drink their hot chocolate with less cocoa butter to become stuck in their beards (come to a virtual tasting to hear more).

The excess cocoa butter generated by these cocoa presses spawned various inventions and ideas. From the perspective of chocolate history, arguably the most important invention was Joseph Fry’s stone ground, stable chocolate bar in 1847 (again come to a virtual tasting for more details). At the same time, cocoa butter’s multiple wonderous properties; including smoothness, shelf life, safety, melting point and flavour absorption; were seized upon by cosmetic and pharmaceutical companies. Indeed a huge amount of cocoa butter never goes into chocolate, instead, it’s the active ingredient in all sorts of lotions, lipsticks, creams, etc. (and much of the time the pressed cocoa mass is a far less valuable by-product, sold off as a commodity to be used for cakes, biscuits, cereals, ice creams, etc.).

What is Craft White Chocolate?

White chocolate is defined (with a few subtle differences) in the US, EU and UK as being made from at least 20% cocoa butter and over 14% milk (powder).

It then gets very messy as lots of different ‘stuff’ can be added, and so, as ever, reading the ingredients list is critical to identify what is really mass produced, ultra-processed white chocolate, as opposed to craft chocolate.

The good news is that over the last few years, more and more craft chocolate makers have started to explore the potential of white craft chocolate. As ever, they are very conscious of the source of the cocoa butter, and equally careful about the other ingredients too. And they’ve explored multiple permutations:

One other intriguing issue occurs with plant based ‘mylk’ white chocolates, as these, similar to milk chocolate, face the challenge of not using “milk from a lactating animal” (the EU definition to use the word milk, and to count as “white chocolate”). Expect to see terms like “whyte” or “wh!te” in future. For now, enjoy the wonderful whyte flavours bars of Karuna.

There are also debates as to the benefits of “natural” or “deodorised” cocoa butter. Cocoa butter does have a smell, similar to cocoa mass, and this can be removed through injecting steam to remove the aromas and volatiles. This unfortunately removes some of cocoa butter’s antioxidant properties. But it does make it easier to use in cosmetics and most of the cocoa butter used for mass produced chocolates is also deodorised so as other additives, aromas and ingredients can more easily be applied.

What About Mass-Produced White Chocolates?

In addition to trying to check whether deodorised cocoa butter is added, you REALLY REALLY need to read the ingredients with mass produced white chocolate and confectionery. To be called “white chocolate”, a product must have 20% cocoa butter and 14% milk. Various unscrupulous makers will therefore confuse by using titles like “white choccy” or “chocolite” and not meet these minimum cocoa butter percentages. Others will meet these minimum standards, and then add all sorts of other stuff. A quick review of 5 well known brands yielded the following:

And beware the amount of sugar! With craft chocolate bars, both milks and white bars very rarely will there be more than 30% sugar (e.g. Mikkel Friis Holm’s white bar is 40% cocoa, 30% milk, and 30% sugar; so even if you could eat a whole 100g bar in one sitting, it’s still less sugar than a portion of many breakfast cereals, or half a can of coke). By contrast, a Dairy Milk and Milkybar are respectively over 56% and 53% sugar, and are designed to be scoffed in one sitting.

A Nod to the Critics of White Chocolate

A cocoa bean (depending on the varietal) will be between 52-57% cocoa butter and 48-43% cocoa solids. So claiming that white chocolate isn’t really chocolate seems a bit unfair; it’d be like arguing dried mango isn’t mango as it doesn’t contain mango juice and water. They are different. But the key issue is what is taken away… and what else is added. So again, please read the ingredients.

Having said this, many of the health benefits, and much of the flavour, in dark chocolate does come from the cocoa solids. Cocoa solids contain hundreds of different chemical compounds including aldehydes, ketones, esters, pyrazines, alcohols, carboxylic acids and more. These compounds give dark chocolate its complex aromas (for example, the ester phenethyl acetate has aromas of honey, ketone acetoin of butter and cream, benzyl alcohol of rose, etc.). And the various health benefits of chocolate from the likes of flavonols, theobromine, etc. also come from the cocoa solids.

So, those who argue that white chocolate may not be as healthy may have a point. But again, one of the great benefits of any chocolate is that if you savour a bar at the end of the meal you can resist that second helping of whatever luscious pudding you are tempted by. And savouring craft chocolate definitely helps the second stomach and digestion.

The Delights of White Craft Chocolate

Cocoa butter may not be packed with flavonols, esters, pyrazines, etc. But cocoa butter is responsible for the amazingly satisfying melt of dark and milk craft chocolates. And white craft chocolate, when well conched, also has an amazing melt (although the snap is far softer).

And either with cocoa butter “as is” (i.e. not deodorised, but either plain or toasted), craft white chocolate bars that are just made with cocoa butter, milk and sugar have extraordinary flavours; just try any of the below.

Similarly, it’s also worth trying the way that high quality cocoa butter can be used by craft chocolate makers to also absorb other flavours, again see below.

One final point: Cocoa butter is also very filling. It’s hard to scoff a real white craft chocolate bar. They are just so rich. With that in mind we’ve built taster boxes for the bars we are tasting for this Sunday Brunch where the bars are ‘taster’ or only 50g bars, or you can try the full size box too and savour it over many weeks (cocoa butter is stable over many years, well after the milk powder).

P.S. If you dial in late to Sunday Brunch, please do NOT believe that dark chocolate comes from brown trees and white chocolate from white, albino trees. This was a (bad) joke.

P.P.S. We’re DELIGHTED to be holding a tasting with Bronwen Percival of Neal’s Yard Dairy where we will be sampling, and discussing, a range of three cheeses and six chocolates; comparing the similarities of location, crafting and flavour. Mark your diaries for the 28th September.