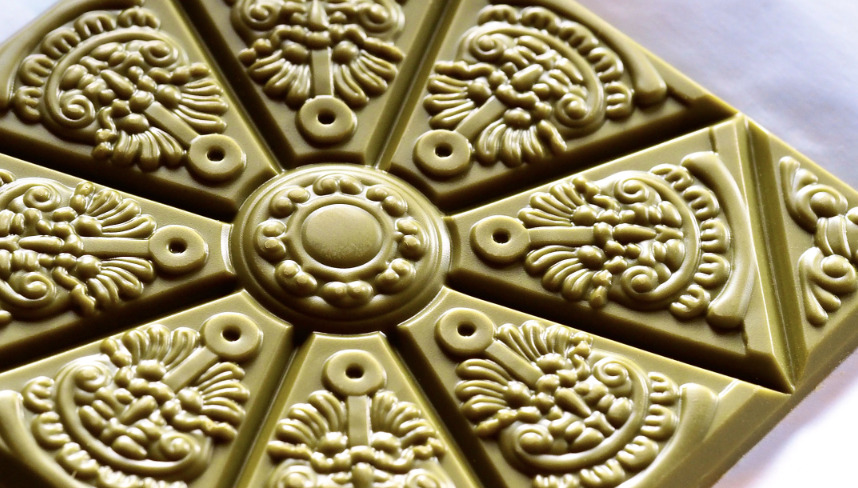 At Cocoa Runners, we champion makers who value quality and provenance, are committed to their craft and, above all, love what they do. We can’t over-emphasise how intricate and time-consuming the chocolate making process is: “bean to bar” simplifies years of hard work! It comes as no surprise, then, that our markers pay serious attention to one of the final stages in creating a bar: choosing its mould.

The choice of mould defines how the finished chocolate bar is going to be experienced. Chocolate moulds have a similar status to wine glasses, where the shape of the bowl and the thickness of the rim affect how the wine is enjoyed (see companies like Riedel who design glasses to enhance specific grape varieties). Thinner bars (for example Franceschi’s Venezuela 70% shareable pieces) melt quicker, so their flavour profile presents itself immediately. Chunkier bars (like Pump Street’s signature thick rectangles) melt more slowly, revealing their flavour notes more gradually.

Sensory science can also be considered when selecting a mould. Different shapes and patterns can evoke particular olfactory or gustatory responses, and craft chocolate makers can manipulate this when moulding their bars. A bar with intense citrus notes or a bright, vibrant profile might be echoed through a sharp, perpendicular design. On the other hand, a bar with a more rounded flavour profile (think whole milk or potato), could be circular with fluid edges.

The look of a chocolate bar creates expectations for its taste; knowing this, makers can twist the rules and design a mould that ‘contradicts’ the bar’s tasting notes. Moulds are a space in which makers’ creativity and sense of fun can really shine.

If moulds can change the way we taste chocolate, they can also implicitly influence eaters to share their chocolate or (understandably) to be a little more selfish. Bare Bones’ chocolates, with their neat, dividable squares, invite customers to savour the bars’ wonderfully clean snap, breaking them up into pieces to share with friends and family. Zotter’s butter caramel bar, on the other hand, a uniform slab of almond praline and luscious caramel wrapped in milk chocolate, feels slightly harder to share.

How Moulds Tell a Story

Craft chocolate makers have fascinating stories to tell. It is impossible to communicate a brand’s story completely in one go, from the initial idea to the bean selection to the chocolate making process. Still, the bar itself can be a great tool to begin this conversation.

Nods to a makers’ origin story can be engraved onto the finished product through mould designs. These designs make for beautiful, unique chocolate bars which are also especially meaningful. Moulds can invite us into a maker’s origin story.

For example, Dick Taylor’s exquisite bar design contains curlicues which replicate the look of intricately carved wood. This mould references the fact these makers are, in their own words, ‘deeply rooted in a background of woodworking and boat building’. Meanwhile Friis Holm’s precise rectangular bars, with their perfectly uniform squares, feel to us like a sly salute to Danish minimalism.

There is also something satisfying about a mould that proudly references the maker’s name. Many of our makers adopt this approach, including Bonnat, Åkesson’s, Ritual, and Duffy’s to name a few). Stamping the brand’s name into the bar marks the chocolate with a symbol of its identity and origins. It’s the ultimate personal touch.

We had the pleasure of speaking to two of our craft chocolate makers about the designs for their moulds. The two makers are very different. Hogarth are New Zealand makers inspired by South America. Their seaside factory creates bars which reference the flavours of New Zealand, including prized Manuka honey, and locally-grown sweet potato. Katya and Armin of Karuna, meanwhile, hail from Austria, but draw inspiration from their time in India. While Hogarth takes its name from its founder, Karl Hogarth, Karuna’s name comes from the Sanskrit word for compassion. Karuna’s bars often take flavours from the wild, with inclusions like sea buckthorn and blackcurrants. What unites these two makers is the tastiness of their chocolate, their commitment to the process of craft chocolate making — and their beautiful moulds.

We had the pleasure of speaking to Karl Hogarth about his wonderful mould design. Karl wanted his design to ‘show commitment’, ‘make a statement’, and be ‘instantly recognisable’; an aim he has undoubtedly achieved! He told us that he had to make a choice between an easily divisible bar or something more unconventional. In his own words, he decided ‘to take the risk and do something special and unique’.

At first, Hogarth planned on inscribing the initial design (see below) onto the bar, to give a shallower engraved effect. However, one of their designers, Danny, envisioned it as a 3D model, with the waves overlapping each other. After creating a CAD (computer aided design) file and sending this to the Chocolate World in Belgium, the mould came to life.

These 3D waves are not only beautiful: they’re personal to Karl, representing his background as a fisherman, sailor, and surfer. They also nod to cacao’s maritime journey to reach Hogarth’s factory in New Zealand (which is only 60 metres away from the sea). Others have commented that the design resembles artwork associated with the Tangata Whenua (Tarn-a-ta Fen-u-a) or Maori people, another link to Hogarth’s proud heritage.

This design perfectly exemplifies how meaning can be quite literally poured into each bar of delicious craft chocolate. We particularly love the bar’s thick border: a fitting frame for such a work of art!

If you’ve ever had the pleasure of eating one of Karuna’s award-winning chocolates (see below), you’ll have been struck by their intricate bar design. We spoke to co-founder Armin about the decisions behind this mould, designed by his younger brother Lorenz. Armin wished to acknowledge cacao’s origin as well as Karuna’s Indian connection.

The result is a bar with stylised fruits and leaves which recreate a traditional Indian paisley motif with a twist. By including natural shapes, Karuna pay homage to the trees from which cocoa pods grow. This emphasises the importance to craft chocolate of cocoa growing and the preservation of natural ecosystems. (It also feels apt, given Karuna’s bars often include delicious fruity flavours.) Armin commented: ‘we really loved that it linked to our origin. In the sense where it all began. In India.’ Karuna’s mould design references the business’s very first inspiration, condensing years of hard work into the material form of the chocolate bar.

Incorporating the cocoa pod’s origin also reflects farmers’ hard work over centuries of growing this extraordinary fruit. The design concentrates the long history of cocoa cultivation into a single pattern. Chocolarder adopt a similar approach, engraving a larger cocoa pod on each of their bars. Chocolarder’s design honours the raw material and reflect their commitment to the use of single origin cocoa.

Chocolate is the perfect material to mould. Its melting point is just below body temperature, so it’s easy to manipulate and can take on almost any shape. See here for some extreme examples! Moulding gives makers more artistic freedom than enrobing, where the chocolate is simply draped over a product. We hope you can now appreciate how our craft chocolate makers have taken advantage of this opportunity. Not only do these artisans craft delicious tasting bars, they turn them into works of art.

We have also put together a list highlighting some wonderful bars that use moulds to enhance the tasting experience. These moulds create intricate visual effects and beautiful textures. This list is incomplete and inexhaustive: we’ve missed out many fantastic chocolate bars. For more gorgeous moulds, check out our list of 10 wonderful chocolate moulds. After moulding and the decoration of the bar, the next step is packaging. To find out more about the possibilities of chocolate wrappers and the like, read our follow-on post here.

Categories: How is Chocolate Made?, Taste & Flavour
Leave a Reply Cancel reply