A luxury dark chocolate bar with black pepper included, made by the renowned maker Akesson’s.

It is often said that Madagascan cocoa has a natural spice to it and in the case of this bar, that is certainly true.  However, this flavour is entirely due to the fact that the bars have an inclusion in the form of black pepper from specially selected vines that climb the trees that have been planted to protect the cocoa trees from the sun. The refreshing hints of green fruits characteristic of local black pepper meet the red-berry tartness of the cacao. This is an intensely spicy dark bar, one for those who like a bit of heat in their chocolate!

You may not know that cacao can suffer from sunburn if exposed to intense sunlight.  In many countries, cacao is grown beneath the lush canopy of the rainforest.  However, in Madagascar, it is often grown alongside taller crops that can provide a degree of shade and protection from the harsh rays of the tropical sun.  One such crop is pepper.

Bertil Åkesson is one of the true heroes of the bean to bar market, pioneering the direct sale of his single estate beans to over three hundred chocolate makers all over the world. Born to a Swedish diplomat father and a French mother, Bertil grew up in Madagascar, where his family settled in the 1970s. There, his father established a number of cocoa and spice plantations which Bertil has expanded. Bertil also crafts his own bars.

Today bars made with his beans win prizes all over the world and this intense single-origin dark bar with spicy black pepper is no exception. It hails from Åkesson’s Ambolikapiky plantation in the celebrated cacao producing region of the Sambirano Valley, North-West of Madagascar. Indeed, many of the world’s best chocolate makers and chefs use cocoa from this estate. 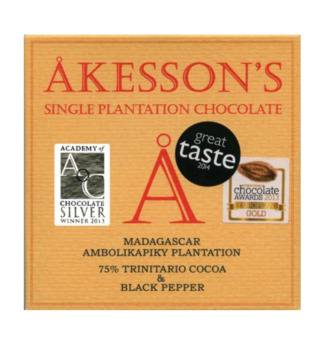