PLEASE NOTE: This listing is for a carton of 12 bars.

This is a dark chocolate that will hit you with an intense fruity and citrus flavour from the moment it starts to melt. Look out for notes of cider and balsamic under all those fruit flavours too. That fruitiness is typical of cocoa from the island of Madagascar, but we think it’s especially notable in this bar. This bar has been sweetened just enough to release the full flavour of the cocoa, and has a long and subtly acidic finish.

This bar doesn’t just taste good, it does good. Madagascan chocolate maker Menakao proudly crafts its chocolate on the island, using only local ingredients. Unfortunately, this is rare even for craft chocolate – it’s estimated that less than 5% of the world’s chocolate is produced in the same country the cocoa is grown. By making the chocolate in Madagascar in addition to growing the cacao on the island, Menakao generate about 4-5 times the benefit of Fair Trade for the local Madagascan economy.

In honour of the men and women of Madagascar of all ethnicities who are at the heart of Menakao chocolate, Menakao decided that the bars should proudly bear the image “not [of] the face of Madagascar, but [of] Madagascan faces.” The beautiful image on the wrapping of this bar is of a Mahafaly man. The Mahafaly (Mahafaly meaning “those who make happy”) live in small groups scattered around the arid and sparsely vegetated region south west of Madagascar. Once feared warriors, they are beginning to become internationally renowned for their skilled craftsmanship, particularly in woodwork, jewellery and tattoo artistry. 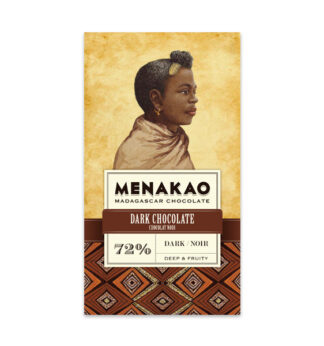