The B9 cacao has a powerful flavour profile: spicy, milky, red grapes and pineapple. Despite being an 100%, Kay and the Taucherli team have crafted the bar be smooth in texture with a creamy mouthfeel.

The Eurasian Coot, or rather Taucherli to the locals in Zürich, is what this chocolate maker is both named and illustrated after. Kay Keusen, the man behind Taucherli chocolate, produces both couverture and bean to bar chocolate. What with Switzerland’s illustrious history and reputation of chocolate making, Kay’s bean to bar range was an ambition to take “customers on a journey” and to reinvent what it means to be a Swiss chocolatier. It became apparent to Kay that the majority of “Swiss” milk chocolate truly wasn’t Swiss at all, as it was instead being produced abroad.

The cacao is sourced from the Hacienda Betulia. Christian Velez produces the cacao and has worked directly with Kay (Taucherli) to produce this limited edition bar. Hacienda Betulia is a Swiss-Colombian family plantation located in the north-western province of Antioquia, Colombia. The cacao grows under an agroforestry scheme on currently 15 hectares alongside 30 hectares of protected native forest. The Hacienda grows a selection of its own Criollo trees – known locally as “Betulia” – to propagate a collection of light coloured beans with rare and complex flavours. Each type of Criollo the farm grows has its own fermentation protocol, defined to ensure that the flavours of each type are developed to reach its fullest potential. This particular Criollo is known as”B9″.

Be the first to review “Taucherli – Betulia B9, Colombia Dark 100%” Cancel reply 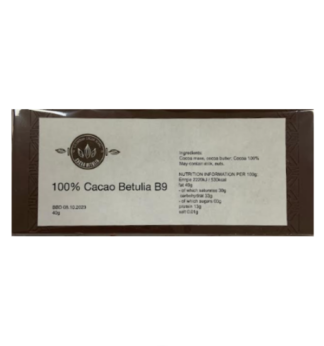