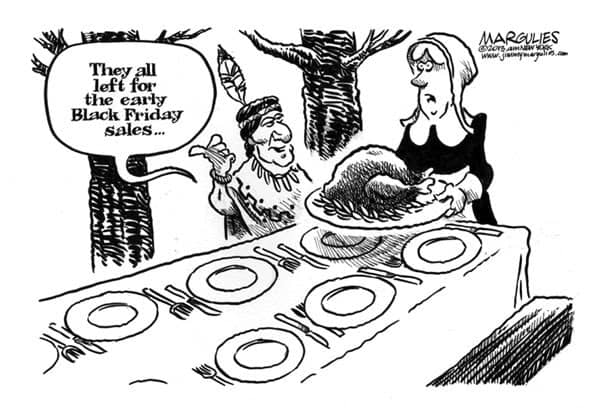 As autumn turns to winter and November gives way to December, the holiday season approaches. In the modern age, this means we get bombarded by the likes of Black Friday, Cyber Monday, and a whole host of other commercially engineered ‘holiday deals’.

If you are American, you may be fortunate to be able to celebrate Thanksgiving before this onslaught. Thanksgiving is in many ways the perfect sort of holiday, bringing together families and friends over feasts of turkey, pecan pie, pumpkin pie, cranberry sauce and other fine foods (including, we hope, craft chocolate).

But what is thanksgiving really about?

As the name suggests, Thanksgiving is about giving thanks. It’s similar to the less entrenched harvest festivals celebrated in the UK and other European countries when summer gives way to autumn. Thanksgiving is celebrated by red and blue states, it’s non-denominational, and above all else it’s about celebrating the positive side of life and sharing joy with neighbours, friends and family.

Where Does Thanksgiving Come From?

The history of Thanksgiving is complex.

Despite the attractive story of the pilgrim fathers, the first Thanksgiving wasn’t the one celebrated at Plymouth Rock, Massachusetts. The story goes that Puritans arrived in America in the 1620s with no means to provide for themselves; the area’s indigenous people helped them survive, and in 1621 they celebrated their harvest with the local Wampanoag tribe.

This traditional tale romanticises the colonisation of America, and relations between colonial settlers and indigenous people. The Wampanoag enjoyed few other Thanksgivings: the tribe was decimated by violence wrought by the supposedly ‘neighbourly’ British colonists. One of the indigenous men, an English-speaking member of the Patuxet tribe named Tisquantum or Squanto, was living with the Wampanoag because his own tribe had been eliminated by diseases brought by the settlers. He had only survived because he had been kidnapped by an English explorer and taken to Europe!

What’s more, this thanksgiving did not mark the start of the tradition. Actually, Thanksgiving was already happening in Virginia several years earlier. In early December 1619, a group of English settlers landed in Virginia and produced a charter declaring ‘that the day of our ships arrival at the place assigned for plantation in the land of Virginia shall be yearly and perpetually kept holy as a day of thanksgiving to Almighty God.’ In this way, the earliest thanksgiving was a religious, rather than a secular festival. It actually follows a trend in the 17th-century English protestant church, which created lots of new feast-days to commemorate historical events (like the rescue of King James I from the gunpowder plot, which we still celebrate on the 5th of November).

Thanksgiving’s status as a public holiday actually has a history that links back to the civil war. For much of US history, Thanksgiving wasn’t a national holiday, and would have been celebrated on a local basis. President Abraham Lincoln made Thanksgiving a federal holiday during the American Civil War! It became a national holiday in 1863, the same year that Lincoln signed the Emancipation Proclamation, declaring the Union army’s aim to free America’s slaves. Thanksgiving played a role in the battle for hearts and minds that accompanied the military move towards the unification of the American states.

Even after Lincoln declared Thanksgiving a national holiday, different states insisted on asserting local independence by celebrating Thanksgiving on different Thursdays. It wasn’t until the late 1940s that President Roosevelt finally persuaded all the US States to agree to celebrate Thanksgiving together, on the fourth Thursday in November.

What Are The Origins of Black Friday?

Inevitably, retailers realised the commercial potential of the holiday weekend following family get-togethers at Thanksgiving. Stores began to launch promotions, sales and all sorts of events: with the globalisation of culture via the internet, this side of Thanksgiving has become a worldwide phenomenon. It is often the only part of this festive season people outside the US experience!

But where does the idea of ‘Black Friday’ come from?

As everyone was driving to malls and shopping centres to take advantage of the seasonal deals, traffic began to become a problem. By the mid-1960s, Thanksgiving weekend traffic became so appalling that the jams gave the name ‘Black Friday’ to the day after Thanksgiving. It’s thought that bus drivers and police in Philadelphia coined the term, as shorthand to describe the heavy traffic clogging the city streets as shoppers headed out to stores.

Giving Thanks, Not Giving In To Commercialisation: Craft Chocolate’s Answer to Thanksgiving

Black Friday, and now Cyber Monday, have become an international phenomenon. With their unstoppable rise, it’s become a sad spectacle of over-consumption. The positive ideals of thanksgiving have given way to a discounting extravaganza, which far from ‘giving thanks’ is all too often about distraction and complicated deals (that often really aren’t actually cheaper).

We don’t think that discounting and special offers are a great way of celebrating Thanksgiving. But we do think craft chocolate is!

If things are sold super-cheaply and their full cost isn’t passed on to consumers, you can be fairly sure that somewhere in the supply chain, someone is losing out. This is one of the key problems craft chocolate seeks to combat!

The makers we work with at Cocoa Runners are working to change the chocolate industry into a market where supply chains are transparent, and everyone in them gets paid fairly, as their work deserves. When everyone in the process of making chocolate is treated well, they go the extra mile to produce the highest quality crops, growing tastier varieties of cacao than those used for mass-produced chocolate. Craft chocolate tastes so much better than commercial bulk chocolate because everyone involved in its production has been given the chance to take care and pride in their work! Check out our grower profiles to find out more about the people growing the cocoa our makers use.

Because we believe that high quality, ethical chocolate is far superior to commercialised cheap thrills, we don’t hold special sales come Black Friday or Cyber Monday. Instead, we use this period to give thanks. In 2021, we celebrated Thanksgiving by donating 5% of all our sales to ‘Chocs for Docs‘, the programme we launched in lockdown to send craft chocolate to NHS key-workers to thank them for their efforts during the Covid-19 pandemic.

When you buy craft chocolate from us, you can not only be sure that you’ll get a delicious, unique flavour experience, but that you’ll also be helping make a positive change to the cocoa industry. Craft chocolate makes sure that everyone in the supply chain is properly thanked and rewarded for all the hard work they put in. What could be truer to the values of thanksgiving?

Some Tasty Suggestions for Thanksgiving Treats

Returning to the spirit of giving thanks with great food and wine, we’ve also curated two Thanksgiving boxes. Or, for a smaller taste of thanksgiving, why not try some of the bars below?

Hogarth’s sweet potato bar hails from New Zealand, but is a nod to the all-American tradition of Thanksgiving yams. (Did you know that the vegetable called ‘yam’ and served on Thanksgiving tables is actually a sweet potato? Real yams are native to Africa, not the Americas at all!) Keeping on the potato theme, US maker BOHO has crafted this stunning potato chip bar, mixing sweet and savoury flavours with a satisfying crispy crunch. Madagascan makers MIA and Menakao have taken up the humble seasonal fruit, the cranberry, and elevated it in fabulous festive bars, featuring autumnal flavours of nuts and orange.

The other bars in the selection below are created by talented makers who called the USA home. While ethical maker Askinosie, based in Missouri, do make classic dark chocolates (we’ve included one of our favourites below), we’ve chosen to highlight some inclusion bars which star classically American flavours. We’ve picked a dark chocolate bar with malted milk, and one with red raspberry, a collaboration with Michigan-based jam makers American Spoon.

Dick Taylor’s chocolate is made in Eureka, California, and the makers drew inspiration for their gorgeous packaging from the boat-building heritage of their West Coast location. Other American makers below include Ethereal, based in Woodstock, Solstice chocolate from Salt Lake City, Utah, French Broad from North Carolina, and Goodnow Farms from Massachusetts.