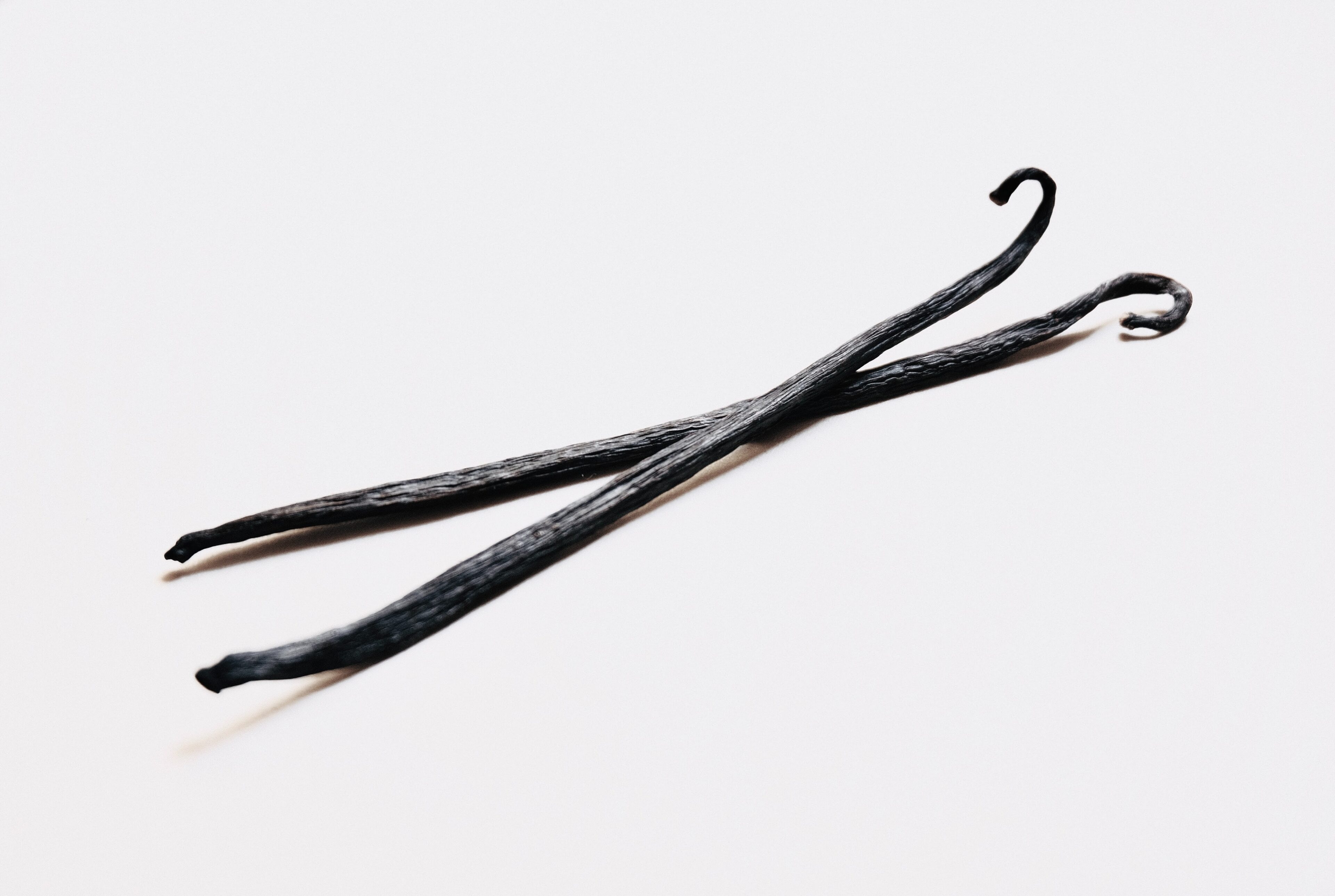 The influence of vanilla on the flavouring experience of chocolate involves more than simply the taste buds. Vanilla is remarkable in how it works on different foods and different cultures because of its ‘cross modal’ characteristics. To explain this, consider these two questions:

If you think of vanilla, which word would you associate it with?

And which of the images below would you associate it with?

Most of us will reply “Bouba” and “rounded one” to these questions. This provides another dimension to the magic of vanilla, showing how our different senses ‘cross-modally’ interact.

This interplay of sense explains, for example, why playing French music makes us more likely to buy French wine, why touching something smooth makes food taste smoother, and why most of us would associate the word “bouba” and the rounded image with vanilla.

It also explains why vanilla is an amazing addition to milk and white chocolate, but a potential ‘red light’ warning if found on the ingredient list of dark chocolate.

So how does vanilla actually work ?

For most of us, the term “vanilla” conjures up ideas of sweetness, smoothness, creaminess, etc.

However, vanilla doesn’t actually taste sweet. If you’ve any essence of vanilla in your kitchen cupboards, or even better a vanilla pod, try placing a small amount on your tongue. It’s not sweet; it’s actually almost spicy.

Yet if you add this vanilla (or vanillin) to a cake, yoghurt, cup of warm milk or a cup of hot chocolate, the impact is dramatic. Somehow they become magically sweeter and richer.

Vanilla and vanillin aren’t like the vast majority of flavours. Adding carrots or bananas to bread or muffins makes them ‘carrot-like’ or ‘banana-like’. Vanilla is different.

The ‘magic’ of vanilla

Adding vanilla changes our perception of ‘mouthfeel’ (by adding creaminess). It reduces our perception of acidity, and indeed for many of us, makes food or drink seem sweeter. As a flavouring, it almost seems to act as a taste – like salt or umami – in revealing different aspects of foods and drinks.

The method to its ‘magic’ remains unknown; it is still up for scientific debate. One intriguing idea is that vanilla acts ‘cross modally’.

In the West, from an early age, we consume many sweet products flavoured with vanilla (ice cream, cakes, milk, etc.) Consequently, it appears that we associate the smell and flavour of vanilla with sweetness.

Repeated experiments and blind tastings have shown that when vanilla is added to milk (or water), even though the sweetness level is the same, consumers think that the liquid enhanced with vanilla is sweeter.

In fact, there are numerous start-ups now claiming they can reformulate processed cakes, ice creams, and milks (by adding the likes of “KillaVanilla”) to reduce the amount of sugar “needed” by 30-40%.

Intriguingly, when these blind tests have been done with people of different nationalities (for example, people from Denmark and China), the addition of vanilla flavouring brings out very different reactions.

Across Asia, vanilla is cross-modally often not sweet but savoury, even added to curries. Indeed Fossa (a Singaporean chocolate maker) add vanillin to their Salted Egg Cereal Blond Chocolate bar, which is inspired by their favourite spicy (not sweet) breakfast bowl of tze-char (see here and below).

Getting back to chocolate:

It’s really not surprising that many craft chocolate makers use vanilla to add some additional perceptions of sweetness and creamy mouthfeel to their flavoured milk and white chocolate bars. Vanilla will enhance the milk’s creaminess and accentuate other inclusions and additives. See below for examples from the likes of Menakao, Chocolat Madagascar, Hogarth, Fruition, Solstice and Zotter.

However, with dark chocolate it becomes far more controversial. Indeed, the vanilla’s inclusion (a combination of ‘natural’ / ‘artificial’ “vanilla flavouring”) is an indicator that the chocolate is mass produced rather than craft.

Mass-produced chocolate is all about consistency and price, and vanilla flavouring will create consistent flavour and mouthfeel. Moreover, it can smooth over any issues with bean or roast quality (so it’s well suited to mass-produced chocolate’s approach of nib roasting, which is more efficient but reduces many flavours). And so many (maybe most) ‘luxury’ supermarket dark chocolate bars will list on their ingredients “natural vanilla flavouring”.

Craft chocolate makers, want to create a “sensory wave” in their dark chocolate bars. As you savour the bar, more and more different aromas and flavours will emerge. And they delight in exploring differences in flavour they can coax via different beans, roasts, fermentations, conches etc. They don’t want, or need, to cover up the flavours they are working to reveal. So, they very rarely use vanilla in their dark chocolate bars.

Vanilla is anything but “plain”! It’s worth pondering its extraordinary history and science (see our other article on the matter). And if you’d like to see how vanilla works its magic for yourself, see the below selection of bars.