Is this the world’s first “Black Chocolate Bar” made with white chocolate?  We think it might be so!  And as Kjartan, Omnom Co-Founder notes this bar is one of those fortunate accidents.

Omnom has never been afraid to work with bold flavours, provided that they’re true to the brand.  They also make a white chocolate bar that’s flavoured with liquorice which is super popular across Scandinavia.  In this bar, Omnom’s choice of inclusions reflect their pride in their Icelandic heritage, and their love of a good beer.

“We had a white chocolate with the inclusion of malt and crunchy cocoa nibs. The recipe was ready, the packaging was ready. We were all set of launching it and then something happened. Something unexpected. It was one of those moments that you dream of. A new ingredient was introduced and the whole project was scrapped. We had some friends from the local breweries visiting and they left us some of their ingredient: a toasted barley, almost burnt.

“We added to our then malted white recipe and something magical happened. Within minutes of tasting, we knew we had stumbled on something new. It was wonderfully toasty, grainy, almost coffee-like, burned toast-like. In the kitchen you really strive for one of those Eureka moments and we just had ours. We set to experiment more and weeks became months. Before we knew it, a whole year had past and our bar had gone from being white to black. Several layers of ingredients had been introduced before finally finding our unique flavour. We went from a simple idea of a white chocolate to having the Omnom black chocolate bar.”

The bar contains three critical, and unique, ingredients that are combined with fine white chocolate to create a bar with a crunchy texture and intriguing malty and charcoal like taste

When you unwrap this bar, the first thing that strikes you is the colour – it is jet black.  As you break off a piece, you notice that its studded with an inclusion.  As the bar melts, there is a clear malted note, and a subtle saltiness that is a pleasing contrast to the sweetness of the white chocolate.  The pieces of popped barley that are sprinkled across the surface give a slightly chewy crunch to this bar.   It’s fair to say that, to date, we haven’t tasted anything quite like this.  With our first piece, we were being tempted to try something unusual, but it was the delicious, well balanced flavours of the bar – and its pleasing texture – that had us reaching for another piece soon afterward.

Born of a true passion for fine food, Omnom is one of Iceland’s first small batch artisan chocolate makers. Read more about Omnom 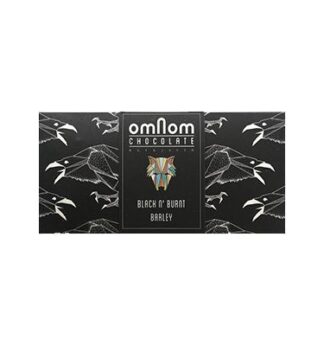