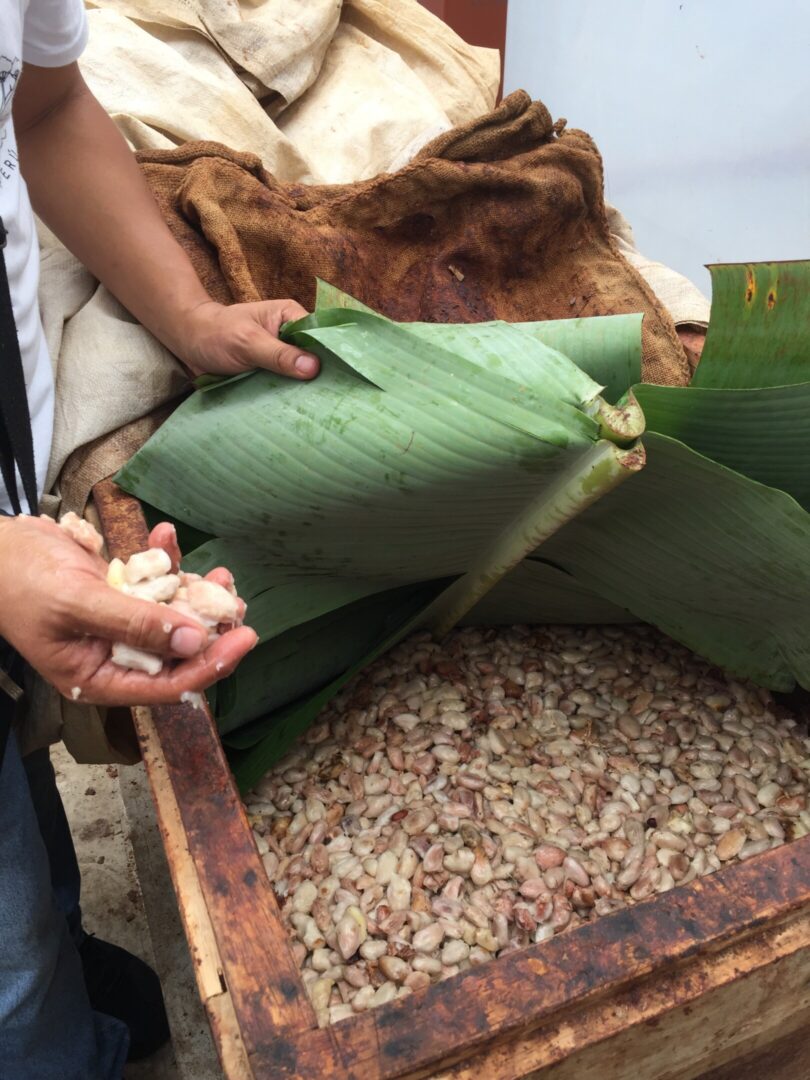 Many of the world’s greatest foods and drinks involve fermentation: wine, beer, coffee, bread, cheese. Exactly the same is true of chocolate. Life would be a lot less fun without the miracles that yeasts and bacteria perform in transforming grapes into wine, hops into beer, and cocoa seeds into chocolate.

Here we explain the importance of fermentation in 1) crafting great chocolate, 2) increasing cocoa farmer incomes, and 3) catalysing the craft chocolate revolution (which involves a wide range of characters, including the United Nations Office on Drugs and Crime).

The History of Fermentation

How humans discovered cocoa bean fermentation is lost to history. But we can surmise that around 5,000-4,000 BCE, in the area that is now Peru and Ecuador, someone realised that these incredibly bitter and astringent cocoa seeds will start to develop interesting nutty, fruity and (almost) chocolatey flavours, if left in a pile (or even in the open pod) for a few days.

Then they started to cook, crack, winnow, and grind these beans into a paste, which made a filling and nutritious drink. And that was how we started to drink chocolate.

We’ve come a long way since then. In the late 19th and early 20th century we started to eat chocolate, and we also realised that chocolate is a great vehicle for other flavours and as a commodity ingredient (think candy bars, chocolate brownies, ice cream, etc.).

Chocolate production came to be about consistency and high volumes – and the onus on good fermentation was lost.

But why is fermentation important?

Craft chocolate is all about coaxing amazing flavours, textures, and sensations out of a cocoa bean. To do this, you need great cocoa beans. And great cocoa beans are about great genetics and careful fermentation. Even a high-quality bean will taste awful (read: rotten meat) if it’s not well fermented.

Yeasts and bacteria transform the chemistry of cocoa beans from their raw state into something capable of making delicious chocolate, just as they turn raw grapes into fine wine.

So the amazing variety of flavours you can get within craft chocolate is all thanks to proper fermentation.

How does fermentation work?

Cocoa pods contain three to four dozen seeds held in a juicy white pulp. Once the pods have been cut down, they are cracked open using machete-like blades, and the pulp and cocoa beans are scooped out.

As soon as the pod is opened, the white pulp immediately reacts with different yeasts and bacteria in the environment and starts to ferment.

To create high quality beans, this fermentation needs to be carefully controlled.

In cocoa processing, there are two main phases of fermentation: anaerobic (without oxygen) and aerobic (with oxygen).

So after cracking open the cacao pods, the seeds and pulp – collectively known as ‘wet cocoa’ – are put into big wooden boxes and covered up with leaves and jute bags so oxygen can’t get in.

The pulp is the perfect environment for the anaerobic fermentation stage. Full of sugars, water, and acids, it provides excellent fuel for microorganisms like yeasts and bacteria to get to work breaking down the pulp.

The yeasts eat the sugars and produce carbon dioxide and ethanol; the bacteria create lactic, citric, and acetic acids. These acids set up the next phase: the aerobic.

After a couple of days (usually), when the anaerobic phase is complete, the beans are “turned” (mixed up) and oxygen is welcomed back into the system. The beans are often poured into another box on a lower tier.

In this stage, oxygen helps the microbes to break down the acetic acid and ethanol. This increases the temperature, often up to around 50°C (which, incidentally, is why there’s no such thing as raw chocolate).

This heat breaks down the cell walls of the cocoa seeds, meaning ethanol and acids can enter the seed and kill the germ within – this point is when the “seed” technically becomes a “bean”.

Inside the beans, enzymes digest proteins and sugars, which creates the various flavour compounds ready to come out during drying and roasting.

It’s a balancing act, however. Over-fermentation will lead to a rise in bacilli bacteria and fungi-like moulds that cause off-flavours like rotten meat.

There are many factors involved in the complicated process of fermentation. It requires experimentation, but it is crucial in producing the high-quality beans that Craft Chocolate is founded upon.

Once fermented, these beans are taken to be dried for up to ten days, ready to be made into craft chocolate.

What difference does it make?

If you want great craft chocolate, you need to celebrate different bean types and different fermentations. As you’ve seen, proper fermentation is a delicate and complex art that can have a massive effect on chocolate’s flavours.

Changing any one variable (length of fermentation, type of bacteria, number of turns, size of box, etc.) dramatically impacts the flavour.

Similarly, Pump Street’s Chris Brennan has been experimenting with placing sourdough starters within the fermentation mix: you can taste the first results of those experiments with his limited edition “Fermentation Project” bar.

Fermentation is a time-intensive, laborious process. And when we started treating chocolate as a commodity, all emphasis on proper fermentation was lost. Beans were (and are) left to ferment by the sides of roads as mass-producing corporations stopped caring about the quality of the beans they bought.

As a result, farmers lost the skills and the incentive to ferment beans well.

A key component of the craft chocolate revolution is teaching farmers about fermentation and helping them connect in cooperatives to achieve the quantity of beans needed for good fermentation. Most of the world’s cocoa farmers are smallholders with 2-5 hectares.  That means that individually they rarely have the critical mass of beans or equipment to perform proper fermentation.

But when given the opportunity and investment, their beans can reach a wider (and higher-paying) market.

For example, the proliferation of craft chocolate bars from Tanzania is thanks to the pioneering work of Brian and Simran of Kokoa Kamili, a centralised fermentery in the Kilombero Valley. Efi and Max (of Qantu) regularly travel down to Efi’s home county of Peru to help teach farmers more about fermentation.

This creates a win-win situation.  We can now enjoy great craft chocolate bars from these beans, and local cocoa farmers can enjoy a higher income as their fine-flavour beans command far higher prices.

Governments have also seen the benefits of encouraging farmers to grow and ferment premium cocoa. For example, in Colombia the United Nations Office on Drugs and Crime (UNODC) has been working for a decade to encourage farmers to replace cocaine with cocoa, and to teach farmers about proper fermentation.

Similarly, USAID has promoted cocoa farming as a replacement for cocaine crops in San Martin, Peru (which is partly how Efi of Qantu learnt about fermentation in the first place).

What about the waste products?

A lot of waste gets created during the fermentation process. For every one tonne of dried beans, for example, there are ten tonnes of fresh shell husks!

Thang at TBros is experimenting with making kombucha out of these husks, but mostly they’re ground up and used as compost on the farms.

And although most of the cocoa pulp evaporates during fermentation, there is always some left over. Often it’s thrown away, but sometimes farmers take the excess pulp (while it’s still fresh) and turn it into a wine or juice. We’re lucky enough to be able to try some of this cocoa pulp juice, from our friends over at Pacha de Cacao.

Category: How is Chocolate Made?
Leave a Reply Cancel reply