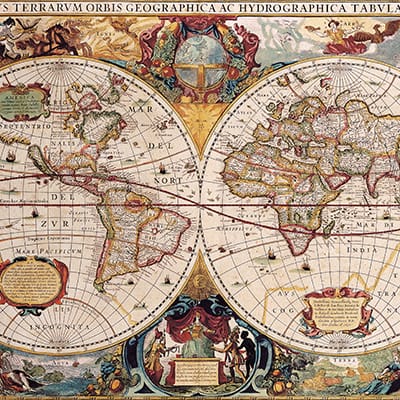 Today, chocolate is everywhere. From North and South America, to Europe, Africa and Asia, all the way to Australasia, chocolate is consumed and/or produced in vast quantities. But that wasn’t always the case. Less than 500 years ago, it was confined to just one small corner of the globe. So how did chocolate spread around the world?

Theobroma cacao, aka the cocoa tree, appears to have originated in the Amazonian jungles of what is now Ecuador, Peru, Colombia, and northern Brazil about 10-15 centuries BCE.  And the first evidence we have of cocoa being consumed is somewhere around 3,500 BCE in modern-day Ecuador (for more on this, please come to a Virtual Tasting).

Somehow or other, cocoa was transported to what is now modern-day Mexico, where it became central to the Mayan civilisation. It appears to have spread gradually throughout both the Aztec and Mayan empires, but how it was spread – as seeds, seedlings or cuttings – is not known.

Indeed, the mechanics of how cocoa seeds and cuttings were spread around South America and thence to Southeast Asia and finally to West Africa are not well established.  There is some evidence that for some of the chocolate spread around the world, devices similar to the “Wardian Box” were crucial to cocoa seedlings surviving long sea journeys.

As Spanish and Portuguese aristocrats became more and more enamoured with drinking chocolate, cocoa supply couldn’t keep up. This was partly because demand was just too high, but things were made harder because of the devastation and deaths of the indigenous Amazonian tribes (by some estimates, over 80% of these tribes were destroyed).

Entrepreneurial farmers, traders and landowners, including religious orders like the Jesuits and Dominicans, started to explore new locations to grow cocoa – and started to open “plantations” everywhere from Venezuela to southern Brazil in the early 1700s.

Soon after, the Spanish started to look further afield – all the way to the Philippines in the 1660s, and then onto Indonesia, Sri Lanka and beyond.  Finally, other colonial powers such as the British and the French saw local demand for drinking chocolate and started to plant cocoa in their colonies in the Caribbean (such as Jamaica, Trinidad, Tobago and Grenada).

During the 19th century, as the Portuguese lost control of their Brazilian colonies, they realised the urgent need to grow cocoa in other colonies, starting with Principe and then spreading to Sao Tome in West Africa.  Again, these plantations were worked by slaves.

In the early 20th century, campaigns were successfully led (in particular by women suffragettes and suffragists) to boycott slave labour-grown cocoa in Sao Tome.  It worked, and forced major chocolate companies to move their chocolate sourcing to mainland West Africa, in particular to Ghana and Cote D’Ivoire, where cocoa farmers still struggle to this day.

Again, if you join one of our Virtual Tastings we’ll explore this more – and explain how the plight of many of the farmers in these countries remains dire (the average income for a cocoa farmer is still less than $1 per day – whereas $2.50/3.00 is a minimum basic income).

So how did chocolate spread?

At some point in history, thanks to the likes of Wardian Cases (pictured above), cocoa became an easily transportable commodity. Somewhat counterintuitively, the ease with which cocoa could be transported makes determining the history of its transportation very difficult (as it wasn’t remarkable enough to be fully documented).

There are many narratives all claiming to document how cocoa came to be grown in Africa, from the story that a Ghanain blacksmith called Tetteh Quarshie smuggled cocoa beans into Ghana, to the story that the Christian missionary society, Basel Mission, helped develop the African cocoa industry, to the tale that Sir William Griffith planted a separate set of cocoa trees in the 1880s in the Aburi Botanical Gardens, which were then distributed to local farmers who rapidly started to plant cocoa seeds.

Overall, our lack of understanding here is a poignant reminder that despite chocolate being a widespread inexpensive luxury and treat, we don’t really think enough about its costs and its history.