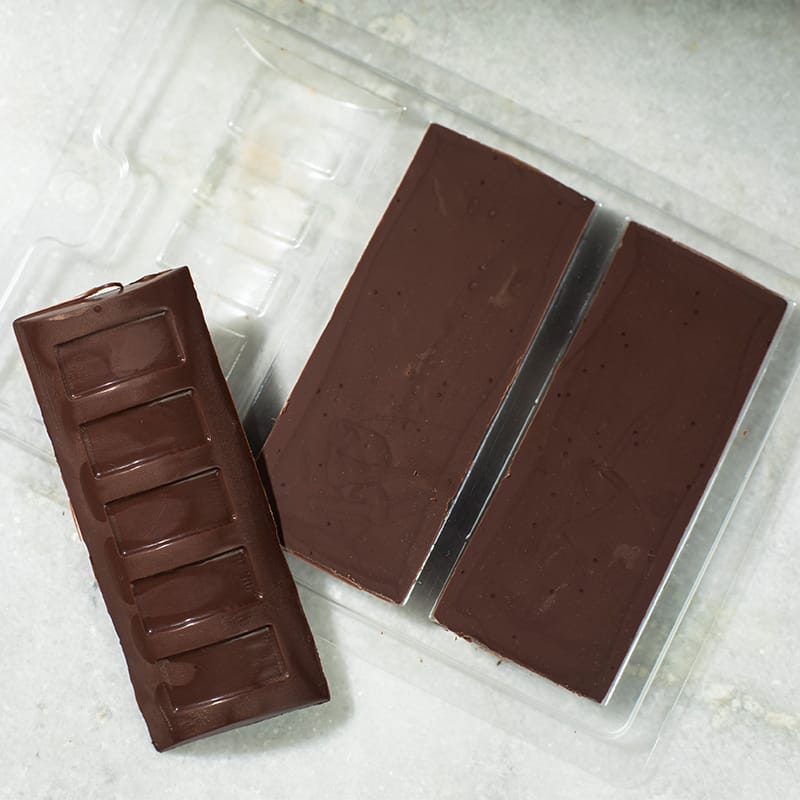 Once you have mastered the art of tempering chocolate (using our guide to perfect tempering), the shiny and crisp results are perfect for making little chocolate truffles and shapes.

There’s a surprising amount to consider to get moulding right – from the size of the mould to the material you use. This handy guide will explain all the basics, and you’ll even be able to have a go at it yourself at home.

In short, yes! It’s perhaps one of the least impactful stages of chocolate making, but it definitely makes a difference.

Once tempered, the melted chocolate is poured into plastic bar-shaped moulds and shaken to remove any air bubbles. Larger chocolate makers have machines and conveyors that deposit exactly the right amount of chocolate into each mould, but many smaller manufacturers still do this part by hand.

The main choice open to chocolate makers is one of thickness: how thick do they want their bars? Thin bars melt quickly, so the bar’s flavours emerge faster. Thicker bars, on the other hand, melt slowly, which allows more flavour nuance to come through (but might lead to a less enjoyable mouthfeel experience).

You can try this for yourself – have a go at comparing Oialla’s wafer-thin bars to Pump Street’s chunky classics.

And that’s not to mention the WOW factor of amazing chocolate moulds – for some makers it’s a work of art! Have a look at some of our more impressive moulds below.

How to mould chocolate at home

When moulding chocolate at home, there are two types of chocolates to aim for. You can go for the simpler solid bars, which are hugely rewarding and allow great scope for inclusions. Or you can aim high with the challenging hollow or filled chocolates – sure to wow your friends (if you get it right!).

Solid chocolate treats are the easiest to create at home as no fancy rotations or emptying of the mould is required.

Be careful not to touch the finished chocolate with warm or greasy hands, as fingerprints will taint your hard work!

Making hollow chocolate shapes is perfect for creations such as Easter eggs and bunnies, or for making chocolate truffles that can be stuffed with all sorts of wonderful fillings.

When shopping for moulds, it is difficult to know which will provide the best results, especially when similar moulds can be found in different materials.

As a rule, professional chocolatiers and craft chocolate makers use solid plastic (polycarbonate) moulds as they keep their shape when handled, rotated, turned upside down and scraped, thereby protecting the chocolate as it sets and making them easier to use in the process.

Category: How is Chocolate Made?
Leave a Reply Cancel reply