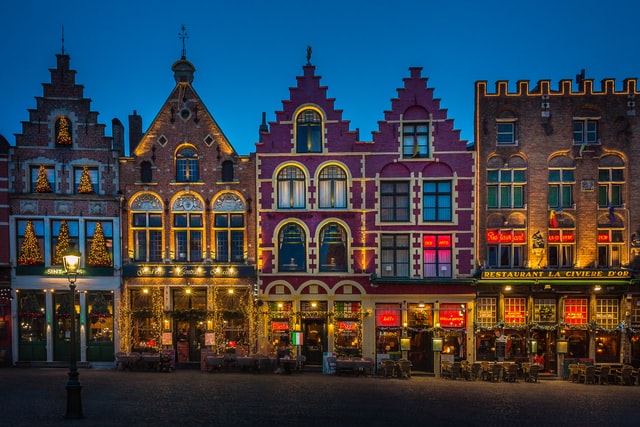 Belgian chocolate has quite the reputation. It likes to claim various titles ranging from “best chocolate in the world” and “the homeland of our favourite sweet treat”. Just seeing the word ‘Belgian’ on a label encourages some consumers to believe they are purchasing a luxury product, hailing from a land where the streets are paved with beer, waffles and pralines.

As you may have guessed, many of these assertions are — to quote the US secretary of state in the Movie Independence when asked about finding aliens – “not entirely accurate”. In this article we would beg to suggest that much of what is claimed for Belgian chocolate should be taken with a large pinch of salt.  Indeed once the history of Belgian chocolate is put into context, you may want to look a LOT more deeply at the label of any snack, biscuit, cake or bar that contains the words “Belgium” and “Chocolate”.

Belgium may be great for beer and waffles. And any country that puts “pommes frites” (chips) along with mayonnaise and ketchup in a baguette to create a sandwich clearly has a sense of humour. See below an example of the famous ‘Miltraillette’ (the name comes from the Belgian for ‘machine gun’).

But Belgium and chocolate are a lot more complicated. As you will soon see, grouping the famous Miltraillette and Belgian chocolate in the same category is perhaps not as absurd as it sounds.

The history of Belgian chocolate

In spite of its reputation, Belgium was actually something of a late bloomer when it came to chocolate.

Belgians first encountered what we now know as chocolate in the 17th Century, when they were ruled by Spain (for more on how chocolate spread across the world, click here). However, for many years chocolate remained a luxury drink consumed almost exclusively by the elites of society.

Then, in the latter half of the 19th Century when Belgium became a separate state and started its notoriously brutal colonization of the Congo, they gained access to cocoa as a crop. This led to a few pioneers back in Belgium starting to experiment with chocolate.

Ironically (but perhaps unsurprisingly) one of the first people to kick start chocolate production in Belgium was Swiss — Jean Nehaus. After immigrating to Brussels, Nehaus opened a pharmacy-confectioners shop, literally selling medicines encased in chocolate. This worked a treat, so much so that in 1885 he set up the Nehuas-Perrin “Confectionery and Chocolate factory”.

The praline: a truly Belgian invention?

Belgium was certainly innovative in the filled-chocolate department, but their claim to have invented the praline is a slight stretch. In 1912, Neuhas designed what he called a “praline” (this is not to be confused with what the American’s call a Praline — see here). However, it is actually the French who have the stronger claim to inventing the ‘praline’: in 1636 a chef named Clément Lassagne bestowed the name to a confection comprising almond and sugar.

Nehaus’s grandson Jean Nehaus Jr started producing “filled chocolates”, which would soon become a staple in chocolate shops across Belgium. Nehaus Jr began using the technique of pouring tempered chocolate into moulds and then adding the filling. This sparked a trend of companies specialising in making these shells for chocolate makers to buy and add their own fillings. Nehaus Jr’s wife Louise also invented the ‘ballotin’ praline box, which quickly became the most-used box design by all Belgian chocolate manufacturers. However, it was not until 1970 that Nehaus began exporting their pralines overseas and expanding sales internationally.

When did Belgium first make it onto the (chocolate) map?

The answer? Not very long ago. Belgium only really became a major player in the global chocolate market in the 1960s.

Before the Great Depression and then World War II, certain Belgian innovations did lead to an increase in chocolate exports in the late 1920s. One of these innovations was Nehaus’s ‘praline’, as mentioned. Another was the invention of a mechanism for the storage and transport of ‘couverture chocolate’ in liquid form by Octaaf Callebaut in 1925. Couverture is the term for a semi-finished chocolate product left after the initial roasting and grinding has been done. This product can then be tempered and moulded by the ‘chocolate maker’, saving them from having to process the beans themself.

The invention of couverture was ingenious. This was chocolate’s equivalent of the revolution Ray Kroc brought to McDonalds (and fast food in general) with standardisation and mechanisation, and an equivalent of the way ready-meals transformed (or rather, mutated) our idea of home cooking.

We might explain the difference between chocolate made using pre-prepared couverture and chocolate made from scratch by using the analogy of a roast chicken and chicken nuggets. Chocolate ‘makers’ using couverture is similar to the way that  the kitchens of fast-food chains “prepare” nuggets  that have been pre-prepared and processed in huge central facilities before being “assembled” in local stores. It’s radically different the way to carefully preparing a chicken from scratch.

Once traditional chocolate makers could procure couverture cheaply and easily, they didn’t (and still don’t) have to make chocolate from beans. They could focus instead on creating interesting chocolate fillings, for example. Couverture also made it far easier for other companies to “use” chocolate, adding it to all sorts of other foodstuffs like cereals, cakes and biscuits. For that reason, couverture also helped home cooks. The production and distribution of couverture soon became the core of Callebaut’s business.

However, the Belgian export sector collapsed during the 1930s, and did not truly revive until the 1960s. After the Second World War, chocolate consumption rapidly increased, and Belgian chocolate producers responded in turn. Academics pinpoint the beginning of the Belgian chocolate boom as being the 1958 World Expo in Brussels (also known as the Brussels world fair), for which companies such as Côte d’Or especially designed new products. Ever since the 1960s, Belgian chocolate exports have exceeded imports, and the following decades saw rapid growth. And the major driver in this growth has been couverture.

Belgian chocolate garnered its reputation in part from Callebaut’s supply of couverture, making Belgium appear to many as a source nation for ‘chocolate’. This was spurred by advertising from Callebaut to compete with other makers, and even the creation of their own cookery school. They opened their first training college in 1988, and now own 16 across the world (and sadly, many of their chefs can come across somewhat “dedicated”).

Clever marketing by other producers has also played a part in creating Belgium’s reputation. Take Godiva for instance. Over its 80 years of existence, the originally Belgian company has used an effective marketing strategy and brand image to make the company a world leader in luxury confectionery.

Back in 1926, chocolate maker Pierre draps Senior began to create pralines in his home in Brussels, soon beginning to sell them to department stores before opening the first Godiva shop in Brussels. As the company expanded internationally from 1958 onwards, these shops were branded as ‘boutiques’, with customers treated in the same manner as buyers at fine jewellery stores. Filled chocolate bonds would be placed in gilded display cabinets before being weighed and purchased The wrapping, packaging and boxes were also designed to give a “luxury” feel, and give the feel of a high end jewellery of fashion boutique. And the similarities to 1960/70s selling of jewellery and chocolate were similar in a couple of other ways — just as customers rarely knew where their diamonds were being mined, Godiva did not (and still does not) tell you where it’s chocolate is sourced.

They also specialise in making some ads with “historic” appeal:

So what does the term ‘Belgian’ Chocolate really mean?

Any labelling describing chocolate as ‘Belgian’ needs to be read with a large pinch of salt.

Technically, there is no need for chocolate to be ‘made’ or even owned by a Belgian company for it to have ‘Belgian’ stamped on the label. The issue is that there is no real legislation protecting the indication of ‘Belgian chocolate’ (or even Swiss chocolate). Despite attempts by the Belgian government to enforce controls, any company can technically market their products through references to Belgium on their packaging, whether in writing or visually. Labelling a chocolate bar as “Belgian” has about as much meaning as labelling it “delicious”.

The widespread use of couverture also makes it more difficult to tell the origins of a chocolate bar. While craft chocolate processes its beans and transforms them into bars all in one place, mass produced chocolate does this all over the place. The cacao nibs may be ground in a totally different country to where the chocolate is tempered, for instance. Rarely will a label specify these locations, allowing companies to capitalise on any slight association with Belgium.

Moreover, the globalisation of companies can make the term ‘Belgian chocolate’ misleading- Callebaut and Godiva are good examples.

For its first 40 years of existence Godiva was in the sole possession of the Draps family, but in 1967 Pepperidge Farm, USA acquired a two-thirds stake. In the same year, Campbell (yes, the soup makers) purchased the remainder of the company and set up a production facility in Pennsylvania. In 2008, Godiva was sold to the Turkish company Yildiz Holding.

Furthermore, Callebaut is also no longer solely Belgian-owned. After undergoing several ownership changes through the 1980s and early 1990s, Callebaut came under the ownership of Jacobs in 1996, the same year that Jacobs acquired the French company Cacao Barry. Jacobs then created the Barry Callebaut group. In 2013 Barry Callebaut also acquired Petra Foods, a cocoa ingredients business based in Singapore, increasing the company’s grinding capacities by 60% and making it the world’s top cocoa processor with 50 production facilities worldwide.

Callebaut, along with many other “big chocolate” players like Nestle, Cargill, and Mondelēz, face court cases with the International Labour Organization (ILO) dating all the way back to the early 2000s. Despite them signing the Haarken Engel protocol in 2001 (a voluntary public-private agreement to eliminate the “worst forms of child labor”- the words of the ILO), their critics remain dissatisfied with their lack of progress.

Callebault clearly is trying (in every sense of the word). In 2018, they announced on their own label bar’s packaging that in another 5-10 years they promise (really promise) to source all their cocoa from child labour free sources. Time will tell.

So as ever, the best advice: read the label! (see here for more)