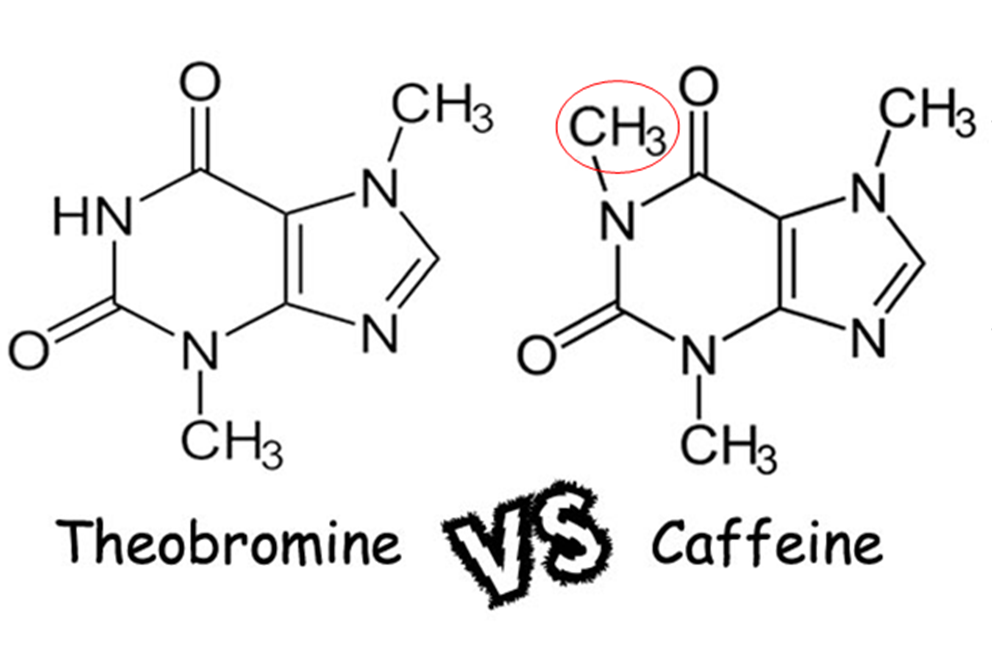 Back in 1841 the Russian chemist Alekasandr Voskresensky discovered an alkaloid in the fruit of Theobroma cacao (aka the cacao/cocoa tree). And he called it ‘theobromine’, reflecting the etymology of “food of the goods” (aka, the cocoa tree; called “Theobroma cacao” by Carl Linnaeus).

This discovery was part of a line of remarkable alkaloid discoveries starting with morphine (1804) that went on to include a range of other interesting stimulants and drugs such as caffeine (1820), nicotine (1828), and cocaine (1860).

Theobromine is one of the reasons why chocolate is so delightful and so stimulating. But despite being remarkably similar in composition to caffeine (see image the above), theobromine’s ‘stimulation’ is quite different. Unlike other alkaloids, theobromine is not addictive, you won’t get withdrawal symptoms from missing your daily fix but at the same time, it does wonders for your heart, blood pressure and general mood.

How do Theobromine and Caffeine Differ?

Theobromine is found in a number of plants and fruits; most notably in cocoa and chocolate, and also in tea (Camellia sinensis), carob, guarana, and yerba mate.

Caffeine is also found in a number of plants and fruits; in particular coffee, and also trace elements of caffeine are in cocoa and chocolate.

Chemically these two alkaloids are remarkably similar (see the above image). Theobromine is technically C7H8N4O2. And caffeine is C8H10N4O2.

Caffeine contains one more ‘methyl group’ than theobromine.  And this extra methyl group is hugely significant.

How do Theobromine and Caffeine Work?

Caffeine, thanks to its third methyl group, can cross the blood-brain barrier and bind to adenosine receptors. Caffeine blocks these adenosine receptors, stopping one feeling drowsy and boosting adrenaline. This is why caffeine “peps” one up; making one more alert and perkier (hence why it’s great for sports like cycling). It can also make you jittery as it promotes an adrenaline surge, and if you consume a reasonable amount regularly you may suffer withdrawal symptoms if you stop drinking coffee/taking caffeine.

Theobromine does not cross the blood-brain barrier. It doesn’t boost adrenaline production or block adenosine reactors. So it doesn’t cause any jitteriness. And you don’t get any withdrawal symptoms (the cravings people have for mass produced chocolate confectionery is from the sugar).

As theobromine is absorbed in our bodies it stimulates the release of nitric oxide, and these in turn reduce enzymes in the blood that constrict our blood vessels. And as a consequence, theobromine causes our blood pressure to decline (note: This may also be due to phosphoesterase inhibition).

At the same time, theobromine interacts with enzymes in our heart and lungs promoting vasodilation and bronchodilation. And this is one reason why dark chocolate is often recommended to help asthmatics breathe more easily.

Theobromine (and caffeine) are also diuretics (or, more graphically; they encourage you to pee). Indeed back in the early 1900s chocolate was regularly prescribed as a diuretic and way to treat edemas (i.e. fluid build ups in the legs, hands, etc.).

Note: Many of the benefits that you get from theobromine you also get from caffeine as the body breaks down caffeine into theobromine. But given that only 10-15% of caffeine is converted to theobromine (the majority is converted into paraxanthine as well as theophylline), the magical impact of chocolate and cocoa as vasodilator, diuretic, etc. are a bit less.

At  very high doses, theobromine has been blamed for sweating, trembling and severe headaches in some cases. But it’s very hard to find large studies on this, and even anecdotal evidence here seems very rare.

However, there are some suggestions that for some (unlucky) people, over indulging in chocolate in massive binges may also cause heartburn as theobromine causes the oesophageal sphincter to relax and so some stomach acids go “the wrong way” (so you’ll need some antacids etc.).

More importantly for dogs (and cats), theobromine is far more dangerous because they metabolize it far slower than humans (humans metabolize theobromine over 5-8 hours versus three to five times this for dogs). So if you do have pets (especially dogs as they, unlike cats, have an affinity for sugar and sweetness), keep the chocolate out of the way.

Note: If you are one of those people who believes that dark chocolate etc. causes you headaches, it may well be that you are allergic to PEA (phenylethylamine; another chemical in cocoa/chocolate) rather than theobromine.

How can I access some these wonderful benefits from theobromine?

So the simple answer here is “eat some dark craft chocolate”. Or you can drink some good quality craft drinking chocolate where the prime ingredient isn’t sugar. Or you can add some cocoa nibs to your smoothie, porridge or whatever. And indeed you can even have a good craft chocolate milk bar (especially if it’s a ‘dark milk’ like Krak’s award winning bar below, as the high content of chocolate in these bars ensures the presence of lots of theobromine). And please see below for some suggestions of some great drinking chocolate and bars.

As you try the recommendations below, remember that there are also a host of other great benefits from savouring craft chocolate; everything from satisfying the second stomach so you’ll gorge less, to accessing valuable minerals like magnesium, zinc, selenium etc., whilst also releasing all sorts of wonders like serotonin, phenylethylamine, etc., which make you feel GREAT! And it’s far better for the farmers and planet.

Delight and relax without any jitteriness. Thank you THEOBROMINE: Food, and alkaloid, of the gods.