An indulgent dark chocolate bar with a toasted twist – look out for hints of banana bread, orange, and cinnamon.

We love this indulgent, creamy dark chocolate bar from Swedish chocolate maker Svenska Kakaobaloget. It puts a tropical, toasty twist on its predominant “chocolatey” flavour. Look out for hints of banana bread, orange, and cinnamon.

Fredrik and Ulrika think of the summer of 2013 as their “vacation that never ended”. While making a coffee stop in the small Swedish village of Österlen, they happened upon the 19th-century red brick school building that housed the Österlenchoklad confectionery factory – and it was for sale. They quit their jobs, bought the factory, and moved 600km to the southern Swedish countryside, where they established their bean-to-bar chocolate company, Svenska Kakaobaloget – “The Swedish Cacao Company”.

The beans in this bar were sourced from Bundibugyo, a district of western Uganda that borders the Semuliki National Park. Renowned for its cocoa production, the district also neighbours the Rwenzori Mountains, a diverse ecosystem that is legendary for holding the source of the Nile River. 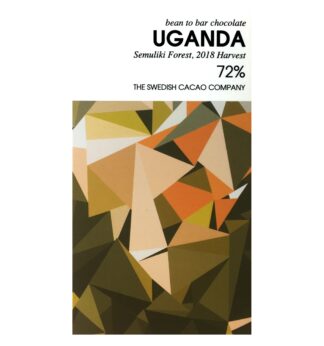