These three bars are all crafted from cocoa beans of the same origin, Bertil Akkeson’s Bejofo Estate in the Sambirano Valley, Madagascar. Using these beans as their basis, these three makers have managed to craft diverse bars, each bringing distinct flavour and experience.
From Bare Bones, we have a wonderfully fruity bar; rich and dark but without bitterness; it has notes of maple syrup, cherry, and raspberry.
From Bonnat, a smooth and creamy bar, which is fruity, as you’d expect from Madagascan bars, but rather than a burst of fresh berries, it’s more like caramelised, almost burnt, raisins.
From Fruition, a fruit-forward bar which has high notes of raspberries and citrus, with a creamy texture and grounded chocolatey finish.

Bare Bones Chocolate was founded in Glasgow in 2018 by Lara and Cameron, two craft chocolate lovers who decided to try their hand making their own. The results speak for themselves! Multiple successes at the International Chocolate Awards and Great Taste Awards have followed, and their beautiful packaging, made from recycled paper coffee cups and repurposed food waste, highlights their commitment to great taste while protecting the planet and its people.

The Bonnat family have been making chocolate in Voiron, France for over 130 years. It was current head Stephane Bonnat’s parents, Raymond and Nicole Bonnat who pioneered Bonnat’s first single origin bars in the 1980’s. Stephane has continued his parent’s tradition and the company now works with 35 different plantations worldwide to produce their bars.

Fruition Chocolate, based in the Catskill Mountains of New York, was founded in 2011 by Bryan Graham. Fruition was one of the first American bean to bar makers to go against the grain, experimenting beyond the new-wave purity of just two ingredients, that is, solely cacao and sugar. Instead, Fruition introduced unique flavours, methods (like Bourbon-barrel ageing!) and also sought to introduce some of the finest and rarest cacao beans to milk chocolate. 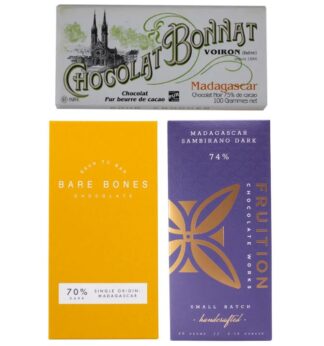