Dark craft chocolate just contains cocoa beans and sugar. There is no milk. And there definitely is no palm oil, vegetable fats or other preservatives that have a ‘use-by’ date. Instead, craft chocolate has a best before date. But often, like red wine, dark chocolate matures with age. So even though these bars are past their best before date, we still think they taste fantastic and they remain in temper. So, we are continuing to sell them. And as an added incentive, we’ve reduced their prices by 10 percent! The same product, for a lower price.

This 70% dark chocolate bar from India contains a delightful combination of bright fruity-sweetness and acidity. Rich with hints of nuts and coffee, it’s a great example of all that Indian chocolate has to offer.

In 2015, brothers-in-law Karthikeyan Palaniswamy and Harish Manoj Kumar decided over a few drinks that they would become India’s first ever tree-to-bar chocolate maker. Harish’s family has been growing cocoa on Regal Plantation since 2005, primarily as an “intercrop” to boost the farm’s healthy diversity, and then later as a valuable product in its own right. But they felt it wasn’t getting the recognition its beautiful flavour profile deserved. So they set out to change that – by producing bars full of flavour and brimming with quality.

Every bean in Soklet’s bars started life on their plantations in the foothills of the Anamalai, close to the Indira Gandhi wildlife sanctuary in southern India. Grown without pesticides among the plantation’s other crops – coconut, pepper, nutmeg, and banana – this special Indian cocoa benefits from the diversity of wildlife and assumes a wonderfully nuanced flavour profile, holding onto the subtle aromas from its neighbouring plants.

This bar was featured in our February 2021 subscription box. You can see what Spencer and Mika had to say about it in the video below: 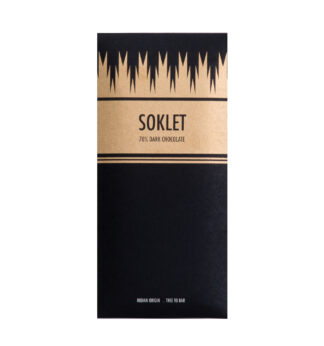