It’s not always easy to taste the difference fermentation can have on a bar of chocolate. But now, Mexican maker Mucho has created a pair of bars – made with the same recipe and the same beans – to showcase this difference. This bar is made with classically fermented beans, while the Lavado bar is made with washed, “unfermented” beans.

And now you can buy them both, and save 10% off their individual prices! See here for more information.

The smooth, fudgy texture melts into an interesting flavour profile with notes of ham or smoked bacon. Biscuity undertones complement the whole, leaving an experience very different from its unfermented Lavado version. Why not try the two side by side, for a discount, and discover for yourself the effect fermentation has on the beans’ flavour?

Ana Maria started Mucho Chocolate in 2012 as a museum to showcase Mexico’s rich heritage in chocolate.   She quickly realised that there was a huge gap in the market for fine Mexican chocolate, and she has set out to highlight and reveal the amazing variety of cocoas and cocoa growing regions in Mexico.  Ana Maria started her production of chocolate bars in 2014, and launched this Emiliano bar in 2019.  Mucho’s packaging is delightfully minimalist – and eminently presentable.

The Emiliano Lavado bar had been named after the town in Tabasco where the cacao is produced, called Emiliano Zapata. This town bears the name of a Mexican revolutionary and advocate of agrarianism during the early twentieth century. The cacao had been sourced from a handful of plantations in the area that are working with best practices for biodiversity.

The Emiliano’s cacao is lightly fermented, which brings its unique flavour, says Ana Maria. The crops that grow alongside the cacao include Jamaica pepper, orange, banana, mango, and cedar. This particular chocolate comes from a Spring 2019 harvest. The cacao underwent a 5.5 day fermentation, with the first turn taking place after 52 hours, then every 24 hours after that. 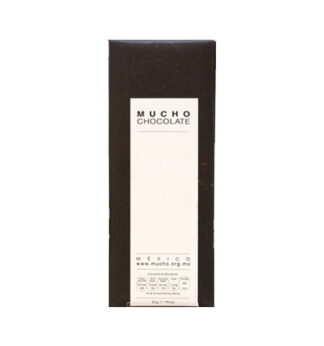