The Eurasian Coot, or rather Taucherli to the locals in Zürich, is what this chocolate maker is both named and illustrated after. Kay Keusen, the man behind Taucherli chocolate, produces both couverture and bean to bar chocolate. What with Switzerland’s illustrious history and reputation of chocolate making, Kay’s bean to bar range was an ambition to take “customers on a journey” and to reinvent what it means to be a Swiss chocolatier. It became apparent to Kay that the majority of “Swiss” milk chocolate truly wasn’t Swiss at all, as it was instead being produced abroad.

The beans in this bar were grown by the folks at ABOCFA, a 13-village farmer cooperative in Ghana known for producing some of the highest quality traceable cacao in the country. Unlike in other cocoa cooperatives, the beans at ABOCFA are not centrally fermented, so each farmer must be taught the best practices for fermenting and drying. The program has been successful, though, because ABOCFA beans are known the world over for making great-tasting chocolate. 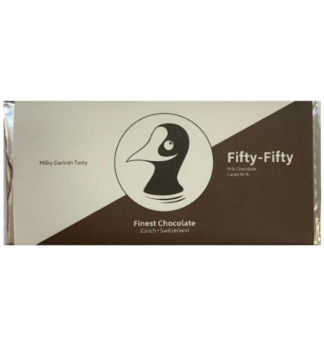