Why You Should Always Have Room For Craft Chocolate 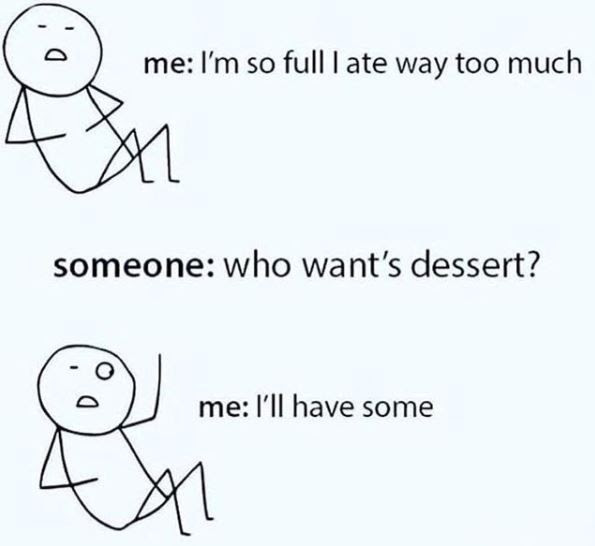 Ever felt really full after the main course of a meal … and then suddenly some ice cream, chocolate cake, or other dessert is offered and magically somehow you are hungry again?

You aren’t alone in this. Indeed, scientists have studied this and come up with a scientific explanation for the condition that’s called “sensory specific satiety”. Or less technically, but more graphically, “the second stomach (or desert stomach)”.

Read on to discover why savouring some craft chocolate at the end of the meal will not only make you feel better (it aids digestion if done in moderation), but is also healthier.

And it’s also worth understanding how sensory specific satiety is (ab)used by ultra processed mass-produced foods (including chocolate confectionery) to make us scoff more, more, and more.

Note: Many (most?) of the claims for chocolate as a miracle food and for its health benefits are somewhat suspect. Basically, the sample sizes of most studies are too small. And the companies financing the studies don’t inspire confidence. However, the logic and case for some craft chocolate at the end of the meal seems far stronger. And we do strongly recommend that you try some of the bars below after a meal in the interest of scientific research!

Why do we feel full?

Explaining why we feel full is intuitive. At its most basic, we feel full because our stomach sends messages to our brain saying “enough” (this happens as hormones are released when our stomach absorbs nutrients and our stomach and intestines become “constricted”, i.e. full).

And as we all know, there is generally a lag between our brains receiving this message, so we often over consume and feel very full. The Japanese have a great expression here; “harahachibu”; eat until you feel your stomach (hara) is 80% (hachibu) full. And then by the time your stomach has communicated with your brain, you will feel full, but not stuffed.

…So why do we suddenly feel ‘hungry’ again at the sight of ice cream and pudding?

Almost all of us, even when we’ve eaten ‘well’, will find that we suddenly have room for our favourite pudding or dessert. And most of the time this favourite next course will be sweet.

Scientists suggest that this is the result of nature wanting us to eat a variety of different foods. You may well be full of beans, fish, meat, etc. But nature knows that in addition to, for example, protein and carbohydrates, you also need fibre and other nutrients.
So, to stop us ‘just’ eating one food, we are psychologically and physically pre-programmed to become satiated by foods that have the same flavour, textures, mouthfeels and sensations. We feel, and become, ‘sated’.

But becoming full isn’t the same as being “sated”. Sated can also be a sign of being bored. And, back in 1956, a French physiologist, Jacques Le Magned, described how humans became bored and dissatisfied if they only consumed one food, but regained their appetite if they were offered new flavours, textures and sensations. In 1981 Barbara and Edmund gave this description a name “sensory specific satiety“.

Scientists suggest that this sensory specific satiety is key to our good health. As Russel Keast, trained chef, professor of food science, and director of Deakin University in Australia notes:

“In evolutionary history, variety was important … different foods provided a variety of nutrients, which helped us survive by providing everything we need for normal function”.

So you can argue that eating a sweet food after a main course is just part of human nature. It’s all part of adding variety to our meals.

“If you eat dessert after you’re actually feeling stuffed you’re tricking your normal sensation of being full … if you think of, and then eat, something sweet your stomach relaxes through three collaborating factors:

And this is where sweets and deserts play a trump card.

“Sweet desserts stimulate this relaxation reflex … it can decrease the pressure on the stomach and reduce the sensation of being full. A sweet dessert allows the stomach to make room for more food” (Again, Berstad and Valeu).

Additional advice. And the case for craft chocolate:

These Danish researchers also have some additional advice; you do need to beware eating too much desert. In their opinion (and we concur):

“The problem is that you don’t know when to stop eating dessert. The brakes on carbohydrate consumption are five metres further down, at the lower end of the small intestine … fat, however, is absorbed higher up in the system and triggers a high-placed brake. It makes you quickly full”.
“The optimal use of dessert is really a question of moderation … the best thing to do is to limit your consumption of dessert to just a taste of something sweet. This won’t split your gut, and at the same time the small dose of sugar will trigger the desert expansion. The result will probably be that you feel a little less full after your meal”.

Sounds like a recipe for savouring some craft chocolate at the end of a meal? Cocoa butter after all is one of nature’s most amazing ‘fats’.

Too good to be true? The evidence:

The studies to test sensory specific satiety have been very creative. Here are a few:

The dark side: How sensory satiety is abused:

This sensory specific satiety (i.e. nature’s way of telling us to try lots of different things) combined with nature telling us to gorge on sweet foods (which historically have been full of nutrients and energy) unfortunately can be, and indeed is, abused by ultra-processed food, and mass produced chocolate, companies. Ever wondered why there are so many variants of classic mass-produced confectionery, and why they contain so many different textures and bits? Look no further.

To quote Michael Moss, author of “Salt Sugar Fat: How the Food Giants Hooked Us”:

“Junk food makers have perfected a process known as subverting ‘sensory-specific satiety’ … (they) owe their success to complex formulas that pique the taste buds enough to be alluring but don’t have a distinct, overriding single flavor that tells the brain to stop eating”.

Try to describe the flavours, tastes and textures of a mass produced chocolate bar. Sure; it’s sweet, and smooth, and consistent; but there really isn’t much development or room for savouring. It’s incredibly easy just to scoff a bar in one go.

By contrast, a craft chocolate bar cries out to be savoured. The complexity of texture, tastes and flavour don’t make you want to scoff more and more. You want to savour and enjoy. It doesn’t take much to be sated and your senses delighted.

Break out your craft chocolate bars and truffles.

So the bottom line is: Next time you feel like having seconds of pudding (or maybe even firsts…) instead break out some craft chocolate. Savour it. Hopefully it will relax your stomach. And it’ll satiate your urge for too much pudding.

Below, we’ve suggested some recently added bars (and truffles) to savour; and please, in the interests of scientific research, do experiment as to how they delight and satisfy you after different meals.

As ever, thanks for your support.