Anything But Plain: Vanilla 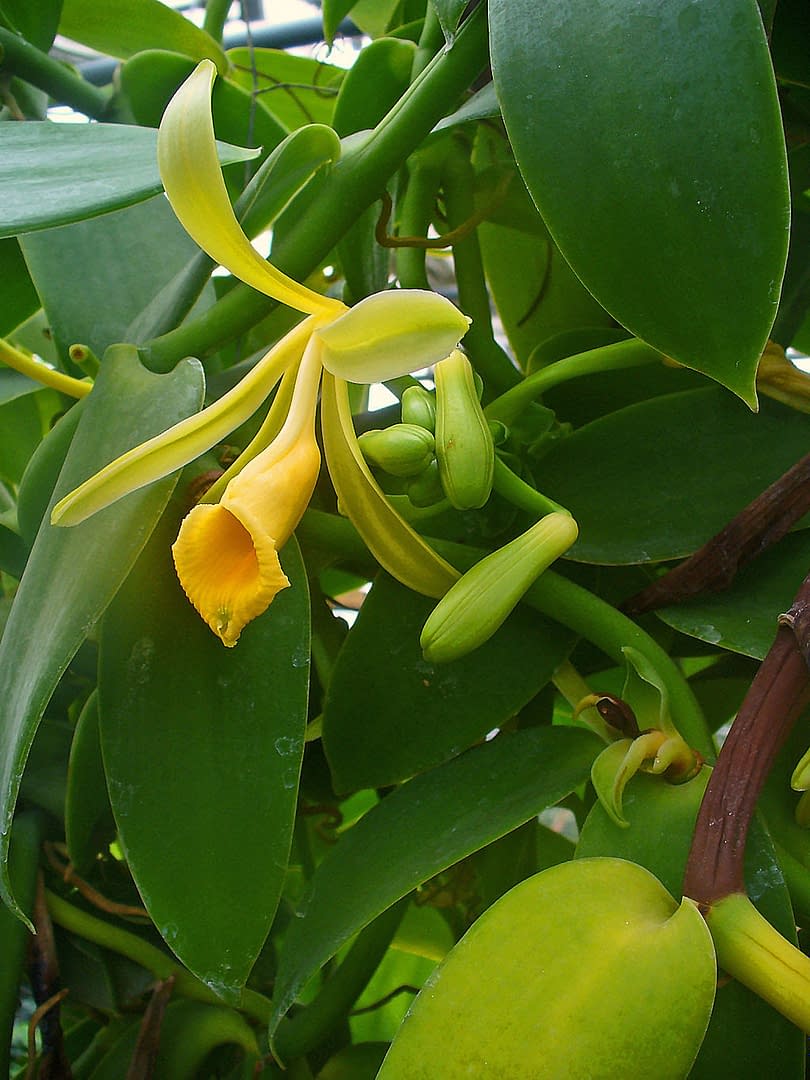 If ever an adjective was unfairly associated with a spice, it’s the word “plain” becoming synonymous with “vanilla”. In fact, vanilla’s history is anything but plain. What it contributes to many foods is, again, anything but plain (think milk chocolate, ice cream, cakes, and even curries). And the differences between ‘natural’ and ‘artificial’ vanilla flavour is not at all “plain and simple”.

So for the next couple of weeks on the blog, we’re doing a deep dive into vanilla. We will try to answer if it is a good or bad sign when you see the likes of vanilla, vanilla extract, natural vanilla flavouring, artificial vanillin, etc. on the ingredients list of your chocolate bar. Spoiler alert: it’s complicated.

And if you want to know the links between pre-Aztec princesses, piracy, rare bees, drug smuggling, synthetic biology, coal, plastics, and orchids, look no further than vanilla! Or just skip below for some amazing craft chocolate bars spiced with vanilla.

The Origins of Vanilla

Vanilla is the fruit of the orchid Vanilla planifolia, which grows on vines hundreds of feet tall and has relied for most of its history on special bees (or occasionally hummingbirds) to cross-pollinate its vanilla pods. And it’s arguably unique among the 25,000 other varieties of orchid in not just being beautiful to look at (see picture above) but agriculturally useful as an ingredient and flavouring agent.

Its first recorded use was with the Aztecs, who in the 15th century conquered the neighbouring kingdom of Totonicapan and demanded tribute in the form of vanilla pods. The Aztecs combined this vanilla with cocoa to make a drink they called ‘chocolatl’ or ‘chicolatl’ (there are lots of scholarly debates on the origin of this term; for more, see previous posts in the blog).

It may well be true that vanilla was appreciated before the Aztecs used it for their drinking chocolate, as an incense or perfume, perhaps. However, unlike cocoa (which leaves traces of theobromine), there are no chemical fingerprints that enable us to work out how vanilla may have been used before then.

Nonetheless, there are some wonderful legends for the origin of vanilla, especially among the Totonac (Jaguar) people of Mexico. They have a ‘Romeo and Juliet’ story of a Prince and Princess falling in love against the wishes of their family and high priests, being sacrificed as punishment, then being turned into the vanilla vine by the gods.

The Post-Columbus History of Vanilla

Vanilla really took off when it was introduced to Europe. Initially it was consumed “Spanish style” (or rather “Aztec style”) in drinking chocolate, and proved hugely popular.

Vanilla’s popularity was then turbocharged by Hugh Morgan, one of Queen Elizabeth I’s apothecaries (think pharmacist with a few other side interests). Morgan started to experiment with vanilla, mixing it with a variety of other consumables: in particular tobacco, pastries, perfumes and (of course) alcohol. On the other side of the pond, Thomas Jefferson added it to ice cream in the US (one of his recipes is stored in the Library of Congress).

With the development of these uses of vanilla, demand boomed. Supply struggled to keep up. Even though the vanilla orchid could be grown outside Latin America, it pollinated in only a few places outside of Mexico (so no vanilla pods emerged).

Eventually in 1838, horticulturalist Charles Morren identified the problem: you need either special bees (Melipona or Euglossine) or hummingbirds to cross-pollinate (and therefore grow) vanilla pods.

It then took another five years, and the smarts of a 12-year-old enslaved boy called Edmond Albius living on Reunion (a tiny island in the middle of the Indian Ocean), to work out a means of ‘hand pollinating’ vanilla pods. Even though this process is painstakingly slow and difficult, it rapidly became (and remains) the predominant way to grow vanilla. And since then, Reunion and Madagascar have become leading exporters of grown vanilla.

As explored above, the use of cocoa and vanilla in collaboration first appears to have emerged in ancient Aztec hot-chocolate-like concoctions. In a more modern context, vanilla found its way into chocolate as a strategy to counteract the bitterness of the often low-quality beans which were being used in the production of early 20th-century chocolate.

Consequently, in the case of bean-to-bar craft chocolate, the use of vanilla can be frowned upon. After all, good quality chocolate should be appreciated alone, unadulterated and in authentic form.

However, in some cases, the best quality chocolate can benefit from the addition of vanilla. Essentially, adding vanilla enhances creaminess, balances sweetness and counteracts bitterness and acidity. Although not strictly necessary with craft chocolate – in cases where craft chocolate is accompanied by a range of flavours, known as inclusions, vanilla can be a welcome addition. Such is the case for Forever Cacao’s Lacuma and Vanilla bar.

To explore further the use of vanilla in chocolate, check out our article on the cross-modal perception of vanilla.

And in the interim, why not explore some great milk and white chocolate bars (including one with matcha) crafted with real vanilla?