Mexico as the cradle of the word for chocolate? 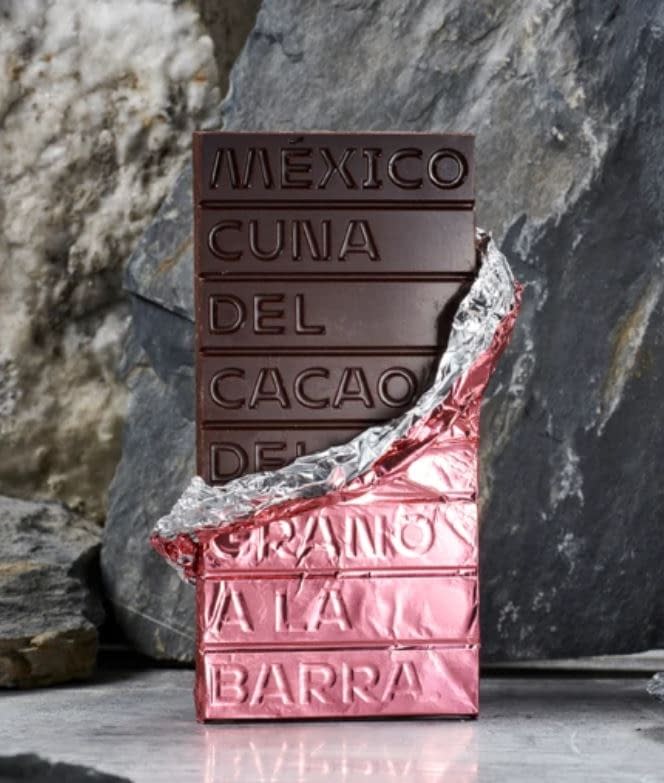 This week we are DELIGHTED to introduce you to a new Mexican craft chocolate maker, Cuna de Piedra (which translates as “cradle of the stone”; a play on Mexico’s description of itself as “Cuna de Cacao”; cradle of cacao).

We are also going to use this occasion to celebrate and explore Mexico’s contribution to the world of cocoa and chocolate (as well as do a little debunking and etymological sleuthing on the origin of the word “chocolate”).

We first met with Cuna de Piedra just before lockdown at the San Francisco Craft Chocolate Show in March 2020, where we were fortunate to be on a nearby stand. And it was fantastic to see it wasn’t just us who fell in love with their bars – it was great to see consumers being wowed by their single estate and flavoured bars.

Enrique Perez and Vicky Gonzales started their dream of Cuna de Piedra after a phone call in March 2019. Both loved chocolate, and both were looking for a product that would raise Mexico’s standing as a country with fine food (Enrique is a food consultant) and high-quality design and workmanship (Vicky is a designer and brand strategist).

Within six months in November 2019 they were able to launch their company and first bars. They work with a sister company, Revival Cacao, to source their beans. The two companies work together with farms and co-operatives in both Comalcalco, Tabasco and Soconusco, Chiapas. And it’s fantastic to see the quality of bars and beans they are achieving as they help the farmers upgrade their harvesting, fermentation and drying approaches.

As is to be expected, given Vicky’s background as a designer, their packaging does a fantastic job of explaining Cuna’s purpose and ambitions (indeed, barely a week goes by without a new design magazine featuring their bars). In particular as you unwrap the bars, look out for their motto that is playfully spelled out across the letters of the bars (see above picture too) that translates as:

Mexico, Cradle of Cacao, from Bean to Bar

A rebirth for chocolate in Mexico?

Cuna de Piedra and their sister company, Revival Cacao, are part of a renaissance of chocolate, and in particular, heirloom cacao and Craft Chocolate, in Mexico.

And it’s not a moment too soon. Despite Mexico’s long history with chocolate and cocoa, the last few decades have been hard for cocoa farmers and chocolate in Mexico. At the turn of the 21st century, Mexico was growing over 50k tonnes of cocoa a year. This halved by the early 2010s, meaning that Mexico was a net importer of cocoa and chocolate. In part this was the result of Mexico being devastated by various cocoa blights; in particular frosty pod. But it also reflects Mexico’s move to commodity crops such as palm oil and maize, with attendant deforestation and destruction of cocoa trees.

Despite these challenges, various craft chocolate makers – Bonnat, Ritual, Krak, Goodnow and Original Beans to name but a few – have discovered the potential of the amazing beans available in Mexico (see below for some examples).

And at the same time, craft chocolate making is now starting to take off itself in Mexico. Ana Rita Garcia Lascurrain helped kickstart this by setting up her chocolate museum and then crafting her own bars (Mucho). And it’s great to see Cuna de Piedra joining these ranks.

Mexico and the History of Chocolate

Read any history book written before the 1990s and Mexico will appear as the “cradle of chocolate”, crediting the Olmecs with being the first people to cultivate and consume cocoa and chocolate over 3,000 years ago.

Recent archaeological work has now pushed cocoa’s fermentation and consumption (as a drink) back a few thousand years earlier to modern day Ecuador and Peru, where the Theobroma Cacao tree can first be traced (see more in our blog). So Mexico has lost its claim to be the first place cultivating and drinking chocolate.

Any which way, the Olmecs, Mayans and Aztecs were HUGE fans of chocolate. At certain periods cocoa was reserved for royalty, warriors and high priests. And one of the first descriptions of Montezuma, the last Aztec Emperor, made by the Spaniards, was their awe of his consuming “the froth of fifty cups of drinking chocolate every night” before he would visit his wives (thereby kickstarting many of the myths of chocolate as an aphrodisiac).

So important was cocoa that the cocoa bean was used as a unit of currency. And indeed this tradition continued in El Salvador up until the mid-19th century, and the Spanish, following Columbus’ lead, would use cocoa beans, instead of metal coins, for small purchases for much of the 17th and 18th centuries.

Etymological Claims from Mexico for Chocolate

Mexico also lays claim, via the Nahuatl language, to have given us the word “chocolate” from their word “chocolatl” (with atl being the Nahuatl word for water). However, this is now challenged by various historians on the grounds that the word “chocolatl” does not appear in Nahuatl until the mid-18th century, and may well have been “borrowed back” from the Spanish who at this point started to write and refer to chocolate in letters and recipes.

Instead some historians argue that “chocolate” as a word derives from “chicolatl”, with the “chicol” referring to the special wooden stick used to beat and prepare chocolate. Other historians propose that the Mayan word “chocol” (which means hot), combined with “atl” (water) is the basis for our word chocolate.

Any which way, we owe Mexico a massive debt for their contribution to the world of chocolate. And it’s fantastic to be able to welcome Cuna De Piedra to our chocolate library.

Wishing you all a great weekend! Hopefully made even more enjoyable with some Mexican beans and chocolate!

P.S. Huge congratulations to Qantu for winning ANOTHER Golden Bean for their Chaska bar (see here) and also to Neary Nogs (winners of the Mott Green award), Bare Bones (winner of a Rising Star award) and to Fjak, Auro and Chocolat Madagascar, who won Shining Bright awards from the Academy of Chocolate (AoC). And a huge thanks to the AoC for all their work in such difficult circumstances.