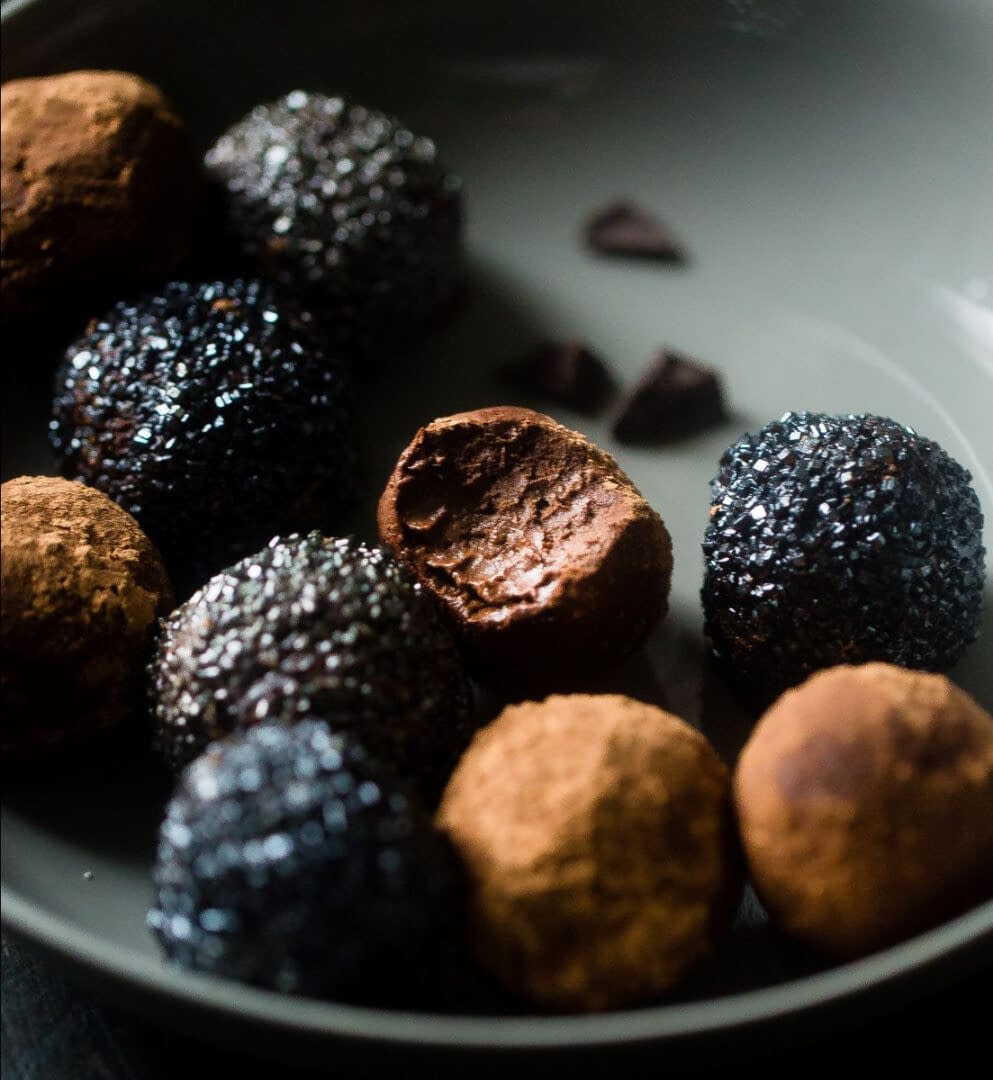 For something so famous and ubiquitous, the story of chocolate truffles is infuriatingly vague. Their inventor, history, naming and even definition are obscure and complex.

They are nonetheless amazing when properly crafted. And we are delighted to, finally, have some craft chocolate truffles from David Crichton of The Careless Collection, and Mike Longman of Chocolarder, and we hope to be launching more soon!

We’ve also pulled together some other packages for Father’s Day, and to take advantage of the great summer weather (please see below).

And if you want to know more about the history and etymology of ‘chocolate truffles’, read on for more information to impress and bamboozle everyone you treat to these delights (spoiler alert: These truffles don’t contain any mushroom or fungi or Piedmont truffle, they aren’t Belgian, they aren’t to be confused with Pralines; but they do have a connection to the French for “chump” or “idiot”).

There are a lot of claims as to who invented the first chocolate truffles, with three French chefs vying to claim the credit for their invention:

Whichever story is correct, the bottom line is that these ganache truffles are amazing. When crafted properly, the combination of melted cream and chocolate encased in a hard chocolate casing is hard to beat.

What’s in a name?

Similar to the claims to who came up with the original truffle recipe, the person who first named them “truffles” is similarly disputed. But it’s generally accepted that because these hand rolled chocolate delicacies are such a luxury, and on the surface physically look very similar to the legendary fungi truffles of Perigord and Piedmont, that this is the origin of their name.

(Note: the history of fungi based truffles is far, far longer: Their consumption has been traced back to the Sumerians and Babylonians in ~4000 BC).

Over the last hundred years, chocolate makers in different countries have further confused the world of chocolate truffles by developing their own recipes and definitions, with massive variations. For example:

The Belgians, as well as claiming to invent couverture in the 1920s, also claim that a Belgian, Jean Neuhas, in 1912 invented a form of truffle which they somewhat confusingly also call “pralines”.

As with truffles, the French have a strong claim to inventing, and at least first using, the term ‘praline’. In 1636 Clement Lassagne, chef to the French Duke of Praslin, named a confection comprising almonds and sugar after the Duke, a famous French general. Initially he called it a Praslin, but upon retiring from working for the Duke, Clement Lassagne founded La Maison de la Praline (which still exists in the French town of Montargis, and still sells Pralines).

These Pralines also spread internationally, enjoying status of a classic dish in New Orleans and Louisiana in the 18th and 19th centuries, where it became a source of great pride, and income, for many Creole families.

Confusion then occurred in 1912 when Jean Neuhas in Belgium started to use the word “praline” to describe what he also called a “truffle” for his chocolate invention of a hard outer shell which contained various fillings. And as with couverture in general, many companies specialise in making these praline casings for other chocolate makers to add various creams, concoctions, etc. but don’t actually make the chocolate themselves.

So, first and foremost, neither the American nor the Belgian pralines are really truffles (and the chocolate they use probably wasn’t made in America or Belgium).

Secondly, as with craft chocolate bars:

To date, very few truffles are made with craft chocolate, and that’s why we’ve held off launching them until now. But this is changing!

Chocolarder crafts all their chocolate, and inclusions, down in Cornwall, including their incredibly moreish Salted Caramel which we tasted on Sunday Brunch. Mike Longman, founder of Chocolarder, directly sources the beans for this chocolate used for the casing from the Ashaninka people in the Peruvian Andes. And Michael then combines some of this chocolate with Cornish sea salt and fresh Cornish cream to make a ganache that they turn, by hand, into truffles. See the truffles here.

David Crichton (of Master Chef fame), works with Pump Street Chocolate to create firstly his bars, and now his truffles (including the bread and butter one, that was so good that Simon and Tim wouldn’t share it with their guests last week; but you can now try them here).

And even though we aren’t (yet) selling them, do also try the fantastic Scottish truffles crafted by Charlotte Flower using sweet cicely (which really is related to the carrot family): See here.

Enjoy! And as ever, thanks for your support (and please keep the feedback and comments coming! Email us here).