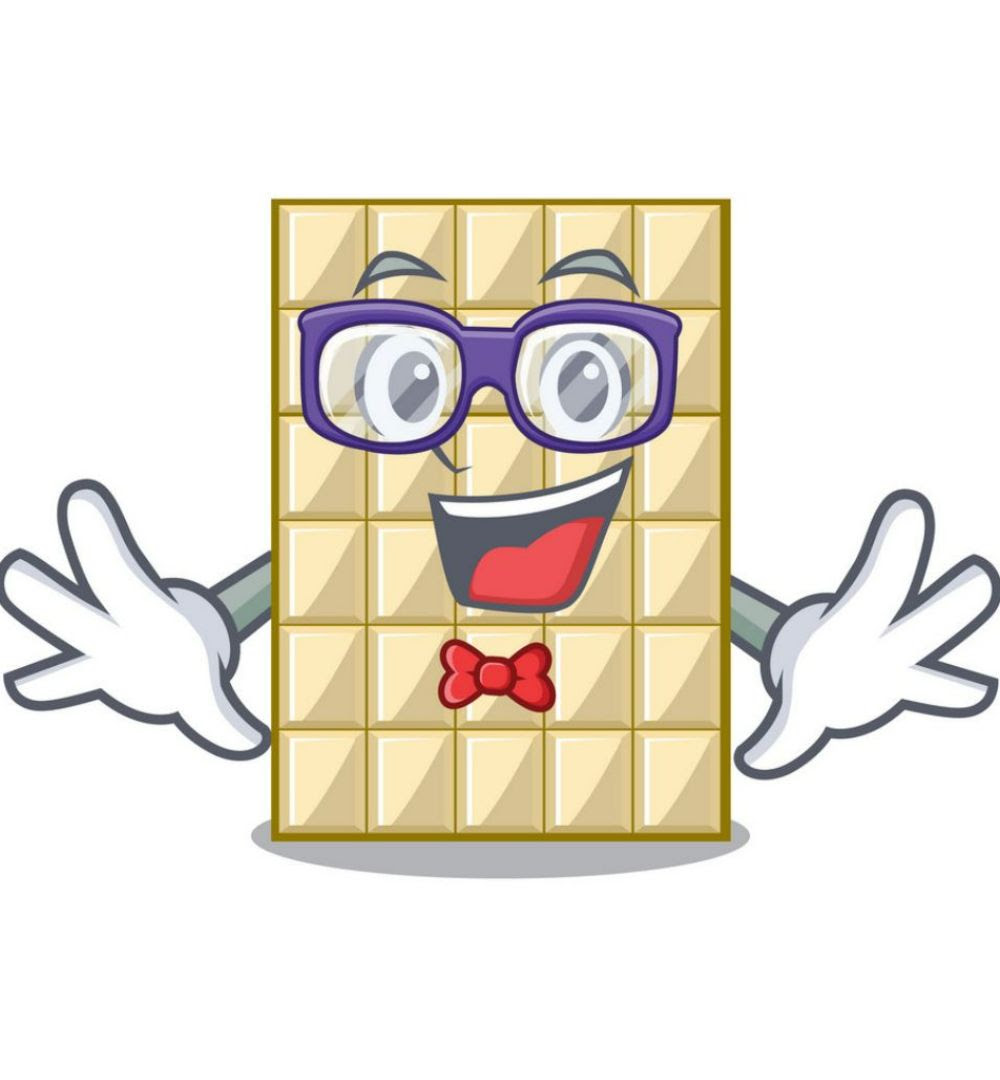 White chocolate is, to put it mildly, divisive. Some love it, some disdain it. Some even challenge if it merits being called “chocolate”! So, is white chocolate really chocolate?What really is it? We’ve taken a moment to do a quick deep dive to review the history and complexities of white chocolate. It’s a more exciting story than you might imagine!

Nestle’s website argues that they “invented” commercial white chocolate with their launch of the Milkybar back in 1936. The Milkybar was a smart repackaging of Nestrovit, a multivitamin product launched on the children’s health market in 1929. Nestle described Nestrovit as ‘a vitamin-enriched condensed milk for children that used cocoa butter to make it into an easy to eat bar’. In hindsight, the only surprise is that it took almost five years for Nestle to realise Nestrovit’s commercial potential. Since then, Milkybar has been a bestseller, turbocharged by the iconic Milkybar kids ads, which launched in 1951.

Nestle’s claim to have commercially launched the “white chocolate category” is hard to argue with. And the flagship product it is still going strong; Nestle sells over 1.9 billion white Milkybar buttons in the UK per annum.

But quite how, and when, anyone first worked out how to make white chocolate is up for debate. White chocolate was almost certainly around before the Milkybar. What’s more, it may well owe its genesis to Georgian-era facial hair! In the early 19th century, Dutch men who drank hot chocolate had a problem. Cocoa butter has many wonderful features, but it doesn’t dissolve well into water or milk. To avoid this unfortunate mess, a father and son team, the Van Houtens, came up with a machine to press cocoa beans. This squeezed out the offending cocoa butter and enabled the fashion-conscious Dutch to safely drink their chocolate. (Come to a virtual tasting to hear more about this weird side of chocolate’s history.)

What to do with cocoa butter? The Invention of White Chocolate

The excess cocoa butter generated by these cocoa presses spawned various inventions and ideas. These included Joseph Fry’s stone ground, stable chocolate bar in 1847, a crucial creation for chocolate history. (Again, join a tasting to find out why.) The leftover cocoa butter was seized upon by cosmetic and pharmaceutical properties. It had many useful qualities for these manufacturers, including smoothness, shelf life, safety, melting point and flavour absorption. Even now, a huge amount of cocoa butter never goes into chocolate. Instead, it’s a crucial ingredient in all sorts of lipsticks, lotions and notions. The pressed cocoa mass, meanwhile, often becomes a far less valuable by-product. It is sold off to be used in cakes, biscuits, cereals, ice-creams and other food products.

But is white chocolate really synonymous with cheap, sweet bars produced in bulk by big chocolate companies like Nestle? We argue not! Let us introduce you to white chocolate as you’ve never tasted it before, produced with care and attention by our craft chocolate makers.

What is Craft White Chocolate?

White chocolate is defined (with a few subtle differences) in the US, EU and UK as being made from at least 20% cocoa butter and over 14% milk (powder).

It then gets very messy as lots of different ‘stuff’ can be added. As ever, reading the ingredients list is critical to identify mass-produced, ultra-processed white chocolate, and differentiate it from craft chocolate.

Luckily, the past few years have seen more and more craft chocolate makers starting to explore whit chocolate’s potential. These makers are very conscious of the source of the cocoa butter, and equally careful about the other ingredients too.

Craft chocolate makers have brought their usual creativity and ingenuity to white chocolate. As a result, many different delicious variations on white chocolate have sprung up. A few of them are detailed below!

Classic Whites. In these bars, the only ingredients are usually cocoa butter, milk and sugar. For great examples of this, please see some examples from Willie’s, Friis Holm and Original Beans.

Toasted Whites. Despite having ingredients identical to classic whites (cocoa butter, milk and sugar), these bars have more of a caramel, toasted note. This depth of flavour is thanks to the way they are crafted. Bryan Graham of Fruition pioneered this style. See Fruition’s Toasted White, but also Åkesson’s white, Dormouse’s toasted white or Ruket’s white bar, which are made in a similar style.

Inclusion Whites. These bars have added ingredients which enhance their white chocolate aspects. The most obvious flavour is vanilla (see Zotter’s white). But there are also more intriguing flavours, like Boho‘s lemon or tumeric bars, or Fossa’s salted egg bar.

Flavoured Whites. These bars use white chocolate to ‘carry’ other flavours. For example, Omnom and Rózsavölgyi Csokoládé have used white chocolate bars to create amazing bars that explore everything from matcha to latte and liquorice, cookies and cream to burnt barley (this last bar is counterintuitively, coloured black).

One other development is plant-based ‘mylk’ white chocolates, suitable for vegans. While most vegan chocolate has traditionally been dark, these (and similar milk chocolates) use plant-based milk substitutes to offer vegan versions of these sweeter, lighter options. However, vegan white chocolates face challenges in counting as ‘white chocolate’. Under EU definitions, white or milk chocolate must use ‘milk from a lactating animal’. Expect to see terms like ‘whyte’ or ‘wh!te’ in future. For now, enjoy the wonderful whyte flavours bars of Karuna.

What About Mass-Produced White Chocolates?

The more obvious way to measure the quality of your white chocolate, though, is to read the ingredients. To be called “white chocolate”, a product must have 20% cocoa butter and 14% milk. Some unscrupulous makers try to get round this, trying to confuse customers by applying labels like “white choccy” or “chocolite” to products that don’t meet the minimum requirements. Other producers fill the other two-thirds (66%) of the chocolate not covered by the regulations with unpalatable additives. Although they meet minimum standards, a quick review of 5 well known brands yielded the following unsavoury ingredients:

And beware the amount of sugar! With craft chocolate bars, both milks and white bars very rarely will there be more than 30% sugar. For example, Mikkel Friis Holm’s white bar is 40% cocoa, 30% milk, and 30% sugar. Even if you could manage to consume a whole 100g bar in one sitting, it’s still less sugar than a portion of many breakfast cereals, or half a can of coke. By contrast, Milkybar is more than 53% sugar, and designed to be scoffed in one sitting.

A Nod to the Critics of White Chocolate

A cocoa bean (depending on the varietal) will be between 52-57% cocoa butter and 48-43% cocoa solids. So claiming that white chocolate isn’t really chocolate seems a bit unfair; it’d be like arguing dried mango isn’t mango because it doesn’t contain mango juice and water. White chocolate and dark chocolate are made from different parts of the bean, but both can be equally delicious. The key issue for chocolate quality is the care taken in the making process…and what is taken away and added. Reading the ingredients is more important than worrying about the cocoa solids percentage!

Having said this, cocoa solids are responsible for most of dark chocolate’s flavour and health benefits. Cocoa solids contain hundreds of different chemical compounds including aldehydes, ketones, esters, pyrazines, alcohols, carboxylic acids and more. These compounds give dark chocolate its complex aromas (for example, the ester phenethyl acetate has aromas of honey, ketone acetoin of butter and cream, benzyl alcohol of rose, etc.). And the various health benefits of chocolate from the likes of flavonols, theobromine, etc. also come from the cocoa solids.

So, those who argue that white chocolate may not be as healthy may have a point. But still, a major benefit of any chocolate is that savouring a bar at the end of the meal can help you resist more sugary puddings, by helping you feel more satisfied.

The Delights of White Craft Chocolate

Cocoa butter may not be packed with flavonols, esters, pyrazines, etc. But it is responsible for the amazingly satisfying melt of dark and milk craft chocolates. And white craft chocolate, when well conched, also has a fabulous melt (although the snap is far softer).

Because they use cocoa butter “as is” (i.e. not deodorised, but either plain or toasted), craft white chocolate bars that are made with only cocoa butter, milk and sugar have extraordinary flavours; just try any of the below.

Similarly, it’s worth tasting for yourself the way in which high quality cocoa butter is used by craft chocolate makers to also absorb other flavours, again see below.

One final point: Cocoa butter is also very filling. It’s hard to scoff a real white craft chocolate bar. They’re far too rich. With that in mind we’ve built taster boxes for for white chocolate where the bars are ‘taster’, or only 50g. Or, you can try the full size box and savour it over several weeks. (Luckily, cocoa butter is stable over many years, lasting even longer than milk powder!)

Category: What is Craft Chocolate?
Leave a Reply Cancel reply