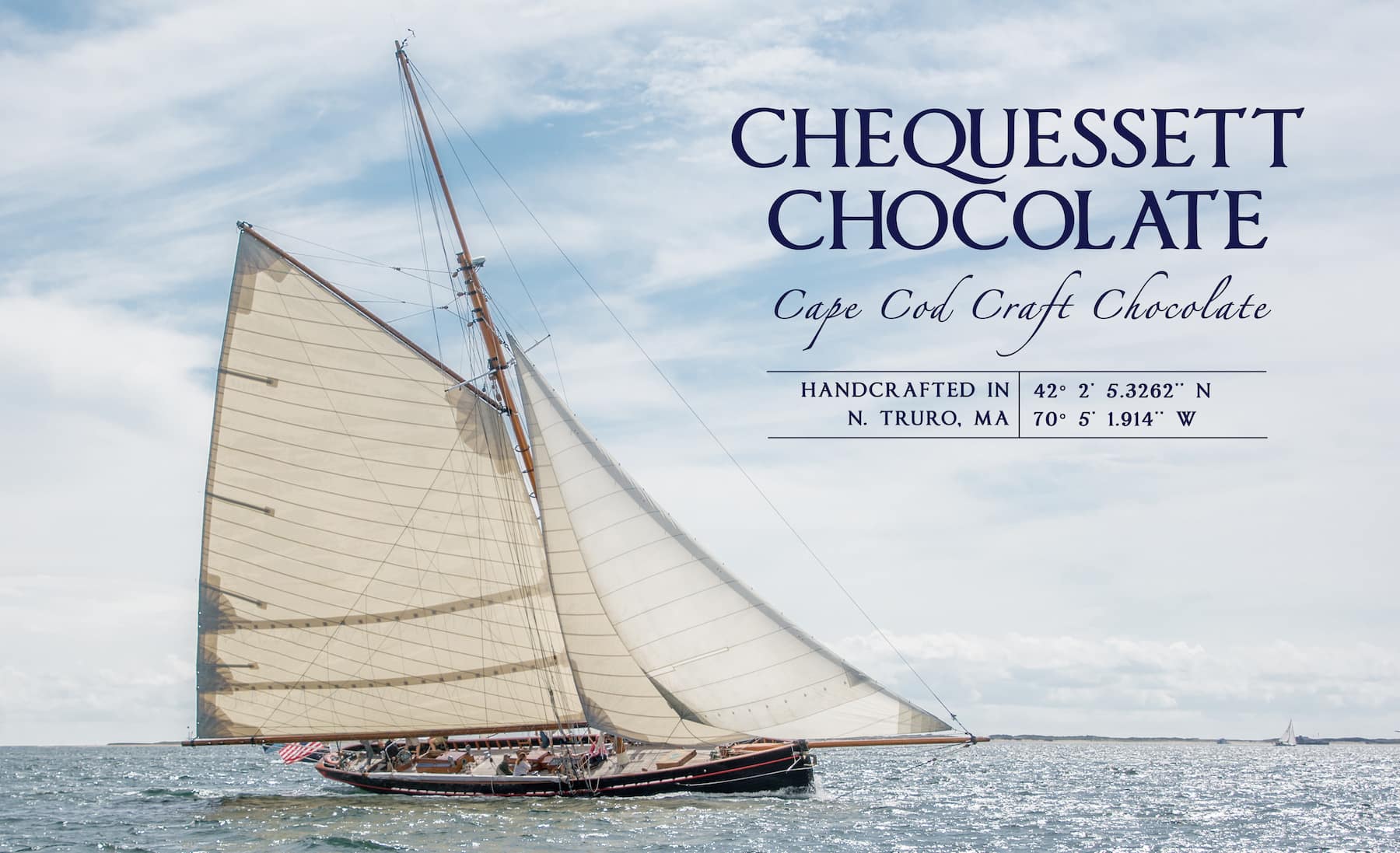 Chequessett Chocolate is based in Cape Cod, Massachusetts and named after the Wampanoag language’s “rushing water”. It’s not only the fact that the founders, Katherine and Josiah, were partial to the alliteration of “Chequessett Chocolate – Cape Cod Craft Chocolate”, but they also wanted to honour the history of the Wampanoag tribe, who are the first recorded Native Americans living in Cape Cod. And nearby Chequessett’s chocolate factory, where the tide rushes in and out of the land, this tidal inlet is aptly named the “Chequessett Neck”.

In 2011 Katherine Reed single handedly launched FarmMaid Foods – the precursor to Chequessett Chocolate. Katherine originally studied Anthropology in college and then, inspired by her time in a culinary school, Katherine launched a venture to explore different foods.. Josiah Mayo later joined forces with Katherine to run a café inside a health food store in Provincetown, MA  where they sold FarmMaid Food’s fresh juices, smoothies along with vegan and vegetarian food.

During a trip to Costa Rica in 2013, Katherine and Josiah stumbled upon chocolate being made in an open air patio. The chocolate maker was winnowing the cocoa shells with a hair dryer, tempering in stainless steel bowls with an infrared thermometer, and grinding their beans and chocolate in a CocoaTown; a deceptively simple process. Katherine and Josiah, inspirited by the bean to bar process and determined to make chocolate back home, emptied out their backpacks and filled them with cocoa beans to carry back to the U.S. Once safely home, all they knew to do next was get their hands on a CocoaTown. The pair bought their first CocoaTown and from then on made chocolate out of their house whilst they built a dedicated chocolate factory.

Today and all year round, Chequessett has an onsite food truck – High Tide Kitchen – serving up Southeast Asian street food and a dessert café in the forefront of the factory. Both the food truck and café incorporate some of the concepts from Katherine’s original FarmMaid Foods venture, think: fresh, smoothies, vegan. Beyond the chocolate factory, it was also important for Chequessett to accommodate both the peak-summer tourist economy and – when most businesses in the area close during the offseason – the Cape Cod community. Chequessett wanted to create a local gathering spot that locals could go to and catch up with friends and family over coffee or cake.

In admiration of tasting Chequessett’s craft chocolate, we spoke to co-founder Katherine Reed to learn the ins and outs of this Cape Cod chocolate maker, and dive more deeply into their passions and story

I founded Chequessett Chocolate with my business partner Josiah Mayo.

Josiah is from Provincetown, MA, which is a small coastal town at the very end of the peninsula of Cape Cod in Massachusetts. He is a commercial fisherman by trade and comes from a long line of fishermen. Josiah would spend his summers working on the Cape in the offseason. He lived and travelled throughout Latin America encountering cacao plantations and cacao beans, all the while becoming fluent in Spanish, which is very helpful for the origin trips we go on now. He still commercially fishes full time working for a lobster diving operation and is more at home on the ocean than in an office but weighs in on important decision making and planning for the business.

Josiah and I both went to school to study anthropology, he went to Reed College in Portland, where I grew up, and I went to Bard College in the Hudson Valley, NY, which is what brought me to the East Coast where we eventually met. My focus was in GIS/cartography and the anthropological effect of sea level rise on coastal communities. After a brief time working for a climate change commission it became clear to me that although this is an important and dire field to work in, given the backwards thinking around global warming presently, it was a mightily depressing one and I went in search of something imbued with more happiness. I would come to find out that chocolate is a far more joyful focus but just as rigorous. The three things that I fell in love with about chocolate is that:

So for these reasons we feel endlessly inspired by what we do. And as to why we did it, we thought it was a pretty sound business strategy for where we are located, which is a highly seasonal, affluent, tourist economy. Most businesses in our region are closed in the offseason so it was important to us to build a business that could serve our community year round and create a local gathering spot that locals could go to and catch up with a friend over coffee or come to with their families.

When did you start your company — and with whom?  How many are there of you?

I launched FarmMaid Foods (the precursor to Chequessett Chocolate) on my own in 2011, which was my first food business inspired by going to culinary school after getting my college degree. Josiah later joined forces with me and we ran a café inside of a health food store in Provincetown, MA selling fresh juices and smoothies and raw, vegan and vegetarian food.

We went on a trip to Costa Rica in 2013 and visited Puerto Viejo where we encountered a rustic bean-to-bar maker making chocolate in an open air patio using a CocoaTown. They winnowed with a hair dryer and tempered in stainless steel bowls with an infrared thermometer. Us knowing nothing about chocolate making, the deceptively simple system they were using emboldened us to get rid of all the contents of our backpacks, fill them up with cacao beans and return back to the US to start making chocolate. All we knew at the time was that we needed to get our hands on a CocoaTown, which we proceeded to buy and made chocolate out of our house in the beginning while we built out our factory.

When we returned Josiah and I rebooted FarmMaid Foods into Chequessett Chocolate and incorporated some of the concepts from that first venture into our café and food truck. These days we have an onsite food truck that we built called High Tide Kitchen, it serves Southeast Asian street food and we have a café/dessert shop in the front part of the factory as well. During our summer season (the busy tourist season on Cape Cod) we have 26 employees and in the off season our crew is about half that size.

I do all the design work for our products. Our bar envelope is covered in bathymetry, which is an ocean floor contour map and has a button and string on the back for easy resealing. We try to incorporate in all of our packaging a nautical sense of place and the ocean that surrounds us. I’m probably most proud of our new point of purchase display box that were about to have printed that features ‘Bloodhound’, an English racing cutter that is owned by one of our best friends. The outside of the box shows the boat under sail and the inside is covered in blueprints from the boat.

In the beginning we started by buying beans directly from Taza Chocolate in Somerville and would pull our car up to the roasting room to load bags. We eventually connected with Uncommon Cacao, where we source the majority of our beans from. We also work with Dan O’Dougherty from Cacao Services and are generally enthused about whatever he’s working on. He linked us up with Costa Esmeraldas, whom we visited this January with a film maker so that we could make a short film about the farm.

What innovations in tech, crafting, marketing etc. are you pursuing?

Our greatest innovations in chocolate making have revolved around our confections. We make over 200 different products in house that are made just for our café. Over the years we’ve developed a lot of interesting, innovative collaborations with other craft New England makers that we’re proud to feature -from local wineries, spirit distilleries, to sea salt producers and local famers.

We eat a lot of fresh, local seafood with courtesy of Josiah’s day job, so lots of oysters for starters. We’ve both always had a passion for fermented foods – chocolate, sour beer, natural wine, cheese, bread, charcuterie, pickled vegetables, kimchi, kraut, kombucha, etc. so it’s no wonder we focus so much on cacao fermentation.

Because of the vastness of our confectionary line and our brisk café business we especially admire companies that have ventured beyond the bar and incorporate their bean-to-bar chocolate into a variety of drinks, desserts, and confections. Top craft chocolate company inspirations would include Dandelion, French Broad and Svenska Kakaoblodget.