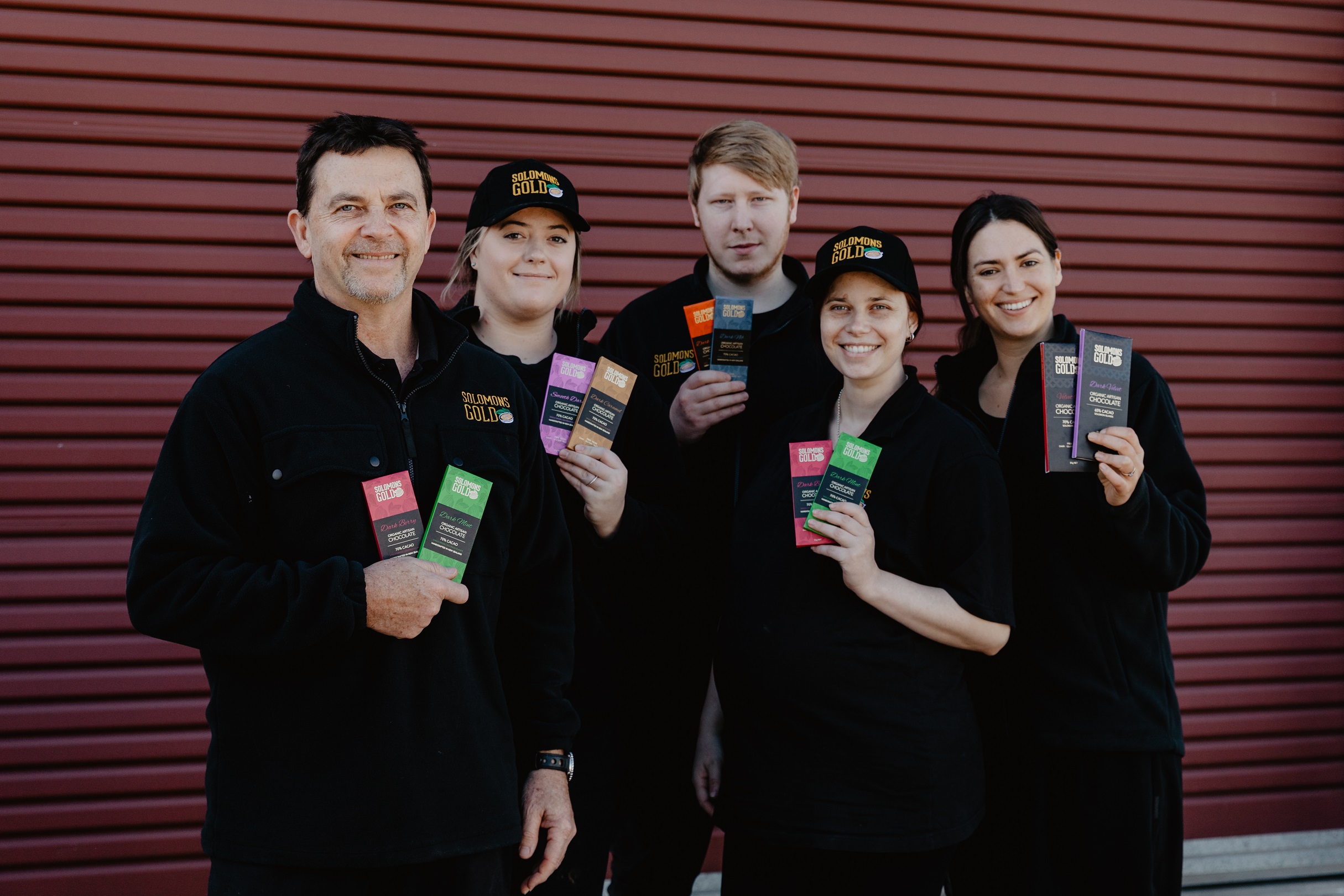 Based in New Zealand, Solomons Gold is the result of years of work.

In 2006 Clive Caroll founded C-Corp with the aim of sustainably producing fine flavour cacao for export. By supporting the local community and improving the harvests, he wanted to promote cocoa from the Solomon Islands internationally and improve the cacao’s overall quality.

Initially C-Corp didn’t make chocolate themselves. This all changed in 2011 when Glenn Yeatman joined the company. With background in producing Arabica coffee he was the perfect person to transform C-Corp.

He first tried roasting the cacao beans from the plantation in his oven. He crushed the beans by hand and winnowed (removed the shells) using his wife’s hairdryer. Next he tried to liquidise the nibs using his wife’s blender, accidentally blowing it up in the process. He added sugar to taste, and even then Clive says he was blown away by the result which was ‘totally unlike any chocolate I had tasted before’.

In 2013 the idea for Solomons Gold was born. On the back of Glenn’s home experiments, Clive and Glenn decided to open their own factory, using the beans from the plantations in the Solomon Islands. They set up their factory in Mount Maunganui Tauranga.

Creating  chocolate from the bean is all about crafting something that is uniquely your own product. In order to do this Glenn and Clive had their machinery built from scratch to their own specification. Using his background in aeronautic engineering, Glenn designed the machines himself, guaranteeing that their equipment perfectly met their needs.

All the beans are sourced from plantation on various of the Solomon Islands, including Horokiki and Guadalcanal. The Amelonado and Trinitario cacao trees are grown without chemicals in this naturally organic and biodiverse setting. Solomons Gold works directly with local farmers and landowners to help with produce the best harvests they can.

Once harvested, the beans are carefully fermented and dried according to very exact specifications. From the wooden fermentation units to how the beans are put out to be dried every single step has been carefully considered and honed to give the best possible results.

As with Papua New Guinea, Vanuatu and Indonesia the climate of the Solomon Islands is quite wet. This makes it impossible for farmer to dry the beans in the sun (as is the usual practice in most cocoa growing regions). Instead the farmers lay the beans out sheltered from the rain and use wood fires to dry the beans. But don’t be deceived by the smoked flavour of the chocolate. Solomons Gold is very careful to not let their beans come in to contact with the smoke.

Instead it is the unique volcanic soil of the Solomon Islands that gives the chocolate its distinctive taste.

Solomons Gold describes its chocolate from as being ‘seed to bar’. Not only do they make it from the bean, but they cultivate, and grow the cacao giving them total control of every step of the process. The chocolate is typically made from just two ingredients: organic Solomon Islands cacao and organic coconut sap sugar.

Solomons Gold In The Chocolate Library